Emil Cruz: From the Philippines to Michigan 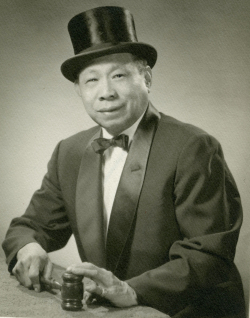 Emil Cruz (1904-1983), born in Camilng, Tarlac, Philippines, as Emiliano Cruz Quindiaga, emigrated to the United States in 1924 at the age of 19. He settled in San Francisco in 1925 before moving to the Detroit, Michigan, area sometime in the 1930s. It was in Michigan that Cruz started a family and begin his Masonic career. Cruz was a member of Schiller Lodge No. 263 and Damascus Commandery No. 42, both located in Detroit.

In 1912, twelve years before Cruz set off for the United States, representatives of the three American lodges in the Philippines—Manila 342, Cavite 350 and Corregidor 386—met to organize a Grand Lodge of the Philippine Islands. Today there are more than 300 lodges in the Philppine Islands. It is presently unclear if Cruz had any familial relationship with Freemasonry before becoming a Mason in Michigan.

Cruz's daughter recently donated a group of items to the Museum & Library that relate to Cruz's Masonic affiliations. The objects date from the mid 1950s to the late 1970s and include photographs, aprons, ribbons, and certificates. One object in particular, a wooden gavel made in the Philippines, and pictured to the right, illustrated Cruz's pride in both his Filipino heritage and Masonic accomplishments. On the gavel, it reads "Emil Cruz / Schiller Lodge No. 263-F & A.M. 1970 / Made in the Philippines / 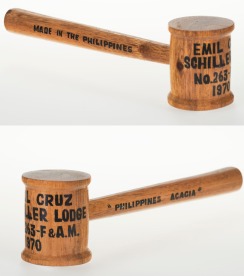 Philippine acacia, also known as Formosa acacia, is a perennial tree native to Southeast Asia and is commonly used in boats, furniture, carvings, and jewelry.

Do you have any information or items related to Filipino Americans and Freemasonry? Let us know in the comments section below.