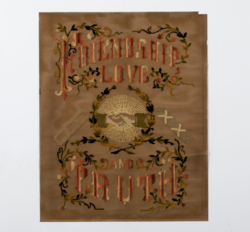 Recently, the Scottish Rite Masonic Museum & Library added the needlework picture on the left to its collection.  Stitched on brown perforated paper in a tent stitch (commonly used in needlepoint, the thread or yarn is stitched diagonally, making a slant), it bears the motto “Friendship, Love and Truth” along with several symbols related to the Independent Order of Odd Fellows.  Originally formed in England in the 1740s, the Odd Fellows are a fraternal organization for men.  The group’s founders looked to Freemasonry (formalized in London in 1717) as a model for their fraternity.  Like Freemasonry, the Odd Fellows perform degree rituals using a symbolic language, wear aprons and pursue fellowship and charity, among other activities.

Needlework mottoes like this one were especially popular for home decoration during the late 1800s.  The perforated paper mimicked woven fabrics and allowed the stitcher to create designs quickly using the simple tent and cross stitches.  The front of this needlework is quite faded, suggesting that it hung in a sunny area of the owner's home for many years.  The photo on the right shows the back of the picture, which was covered while it hung on the wall.  As this photo shows, the original colors were very bright.  It helps to demonstrate the fading and damage that prolonged sunlight can cause for textiles. 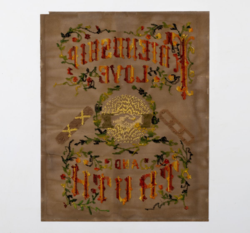 The back shows the original colors. Photograph by David Bohl.

Shortly before we acquired the Odd Fellows motto shown above last year, we also added the motto at the bottom to our collection.  Initially, because of the all-seeing eye and the square and compasses symbols, the dealer offered it to us as a “Masonic picture.”  However, the lettering, which reads “Honesty, Industry and Sobriety,” identifies it as an Order of United American Mechanics motto.  Patterns for these mottoes came in many designs, including ones targeted to members of American fraternal groups.  Like the Odd Fellows, the Order of United American Mechanics also took inspiration from Freemasonry when establishing itself.  This is evident from the symbols on this motto.

The Order of United American Mechanics was founded in 1845 as a nativist anti-immigration organization.  One of its objectives was to help its native-born members find employment.  Given its focus on labor, the square and compasses emblem used by the OUAM usually has an arm in the center wielding a hammer, although that part of the symbol is not included on this motto.