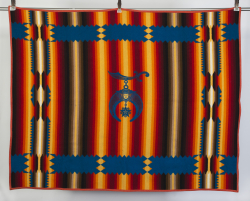 In 2018, the Scottish Rite Masonic Museum & Library added to its collection two 1920s wool blankets with Native American-inspired patterns and Shriner emblems as their featured central design. One of these, pictured at left (and the reverse, below), was manufactured by Oregon’s Pendleton Woolen Mills. It bears a label reading “Copyright 1921.” At that time, in fact, blankets of this style enjoyed popularity in American culture.

From the late 1800s to the early 1900s—ending right around the Great Crash of 1929—a vogue for Native American goods held sway in the U.S., for art collectors and fashionable types all the way down to Americans of more modest means. Popular magazines touted domestic displays that ranged from just a few items, to entire rooms arrayed with Native American baskets, bowls, and blankets. Known as "Indian corners," these displays became a common feature in home design, with many of the goods used in them created specifically for the market by Native artists. Merchants and makers sold these goods in department stores, “Indian stores,” and other commercial outlets.

Blankets like this one—called trade blankets, since they were originally exchanged between Native Americans and European settlers—were among the most popular collectors’ items. Pendleton Woolen Mills was the first American company established solely for their manufacture. Although there were other mills that also produced this kind of blanket, Pendleton took the craft to a new level. This was thanks in part to its employment of loom artisan Joe Rawnsley (d. 1929). Rawnsley toured the West to work with Native populations in creating specific designs and color schemes inspired by different tribes’ traditions. He used the Jacquard process in which punched cards guided automatic looms to produce blankets of much greater variety and detail than previously possible.

But what about that Shriner emblem, with its familiar crescent and scimitar? Around the time of this blanket’s design copyright, the Shriners—and Freemasons in general—were growing in strength and number throughout the country. National membership in the Shrine had grown to approximately 500,000 by 1921. Possibly this blanket was created to attract the purchasing dollars of this Masonic group. Regardless of what prompted its creation, this blanket reflects the popular interest in both Native American objects and Freemasonry in the 1920s. 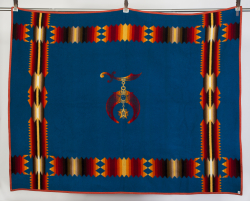