A Salute to the American Military 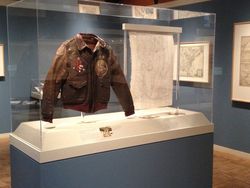 This summer (2013), the Scottish Rite Masonic Museum & Library is pleased to be one of 1,800 museums across America to welcome military personnel and their families in collaboration with the National Endowment for the Arts, Blue Star Families and the Department of Defense, as part of the Blue Star Museums program.

The program runs from Memorial Day to Labor Day and identifies museums that offer free admission to active-duty military personnel and their family members. The Museum & Library is included on the Blue Star Museums website. “Blue Star Museums is something that service members and their families look forward to every year and we are thrilled with the continued growth of the program,” said Blue Star Families CEO Kathy Roth-Douquet. “Through this distinctive collaboration…service members and their families can connect with our national treasures.” The Scottish Rite Masonic Museum & Library is proud to participate in this program and to support our military families.

The Museum’s collection includes numerous objects and documents associated with the American military and its soldiers, dating from the Revolution to the Iraq War. The leather jacket shown here is currently on view in our exhibition, “Journeys and Discoveries: The Stories Maps Tell.” It was originally worn by Technical Sergeant Ronald W. Hirtle (1924-1986) during World War II. A radio operator and gunner, Hirtle belonged to the 491st “Ringer” Bomb Squadron of the 14th Air Force – also known as the “Flying Tigers” – and logged over 200 combat hours on almost 50 bombing missions in the China-Burma-India Theater. 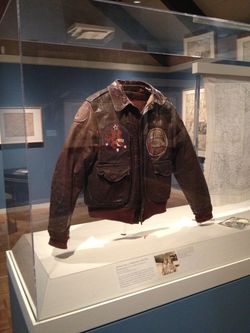 The exhibition also features an Escape and Evasion Map of Burma and Siam and the Far East and a selection of Asian currencies that the Air Force provided to Hirtle. An airman like Hirtle could be shot down in unfamiliar territory. To prepare for this possibility, the Air Force equipped its flyers with lightweight escape kits. Hirtle’s map is printed on silk making it quiet to use, more impervious to water than paper and easy to hide. The currency would allow him to buy food and water, or pay a local resident to help him return to American forces.

“Phony as a $3 bill.” Today, this phrase conjures up images of smarmy swindlers selling counterfeit merchandise. So I was surprised to learn that legitimate $3 bills, like the one seen here, once existed. So did bills in a variety of denominations that might seem strange to us today, from 1/2¢ on up.

From 1836 to 1866, no Federal laws regulated banks. Each state chartered its own financial institutions, and each bank issued its own currency. According to one source, over 30,000 different bank notes were created during this 30-year time period. Not always backed by gold or silver and often easy to counterfeit, many of this wide variety of bills could prove worthless—or, as we say might today, phony as a $3 bill.

The U.S. government reestablished control of the banking system to finance the Civil War. In 1861, it began issuing bank notes. Then the National Bank Act of 1863 created a national banking system and uniform national currency, printed by private companies under contract to the U.S. government.  In 1865, the government levied a 10 percent tax on state bank notes, rendering them unprofitable for the banks to issue, thus ending what is now known as the free banking era. Since 1877, the U.S. Department of the Treasury has been responsible for printing all U.S. currency, and it hasn’t printed any $3 bills. But you can see this one at the National Heritage Museum, on view in “Curators’ Choice: Favorites from the Collection.”