Order of Railway Conductors: A New Member is Initiated in 1904 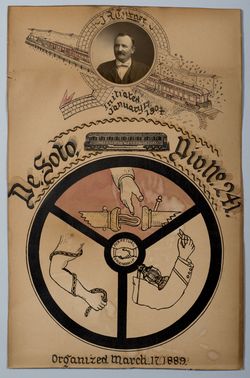 The Order of Railway Conductors was founded in 1868.  The original organization was a fraternal benefit and temperance society rather than a labor union.  It was established in Amboy, Illinois by a group of conductors on the Illinois Central Railroad.

The ORC represented the interests of train conductors.  Like ship's captains, they were the most prestigious and highly compensated railway workers of their time. This particular division of the ORC, the DeSoto Division, was organized in 1889.  At this time, any member that participated in a strike would be expelled from the order.  Because of this, a labor union was formed for railroad conductors, named the Brotherhood of Railway Conductors, in 1885 and continued to be a rival force.

Joseph R. Turner (1868-1926) received this membership certificate (shown at the left) upon his initiation in 1904 to the De Soto Division No. 241 of ORC in DeSoto, Missouri. Turner was a railroad conductor for the Missouri-Pacific railroad and owned his home in DeSoto, Jefferson County, Missouri.  He was married to Ida Alice Tonget (1866-1931) in Broadway, Union County, Ohio in 1889.  They had ten children and lived in DeSoto, Missouri.

Turner's certificate depicts the symbols or emblems of the ORC which are inside the black circle (or wheel).  They are the lantern, representing the conductor's profession, the arm with the chain, and the hand reaching for a device to couple railroad cars.  In the center of the circle are the clasped hands which symbolize perpetual friendship.

Turner would have gone through an elaborate ceremony for his initiation.  The ritual for this initiation consisted of an opening (or introduction), initiation, obligation, closing, and prayer. The teachings, or principles, were Fidelity, Justice, and Charity in Perpetual Friendship.  This ritual has a structure that is similar to Masonic and other fraternal initiation ceremonies.

Membership Certificate for the Order of Railway Conductors, 1904.  Scottish Rite Masonic Museum and Library, A2013/31/1.  Photograph by David Bohl.