Healing a Cerneau Mason: The Story of Nathan Hammett Gould 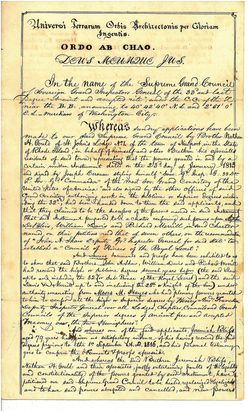 Nathan Hammett Gould (1817-1895) was born in Newport, Rhode Island on April 23, 1817.  He resided in Newport most of his life and was a merchant by profession, having an office at 30 Touro St.  He was also manager of Gould and Bull's American Law and Claim Agency, which was located opposite City Hall.  He married Emily J. Rogers on September 29, 1845 in Boston, Massachusetts.

In January of 1849, Gould received the Scottish Rite degrees from the Grand Council of Sublime Princes of the Royal Secret for the State of Rhode Island, obtaining all 32 degrees. This Scottish Rite body was organized by Joseph Cerneau in 1813.  Later in 1849, eleven members of the Newport Scottish Rite decided to petition the J. J. J. Gourgas-led Supreme Council and  pledge their allegience to this to this group.  While they had formerly been under the allegience of a Supreme Council formed by Joseph Cerneau, this group had lost influence by the 1840s (they would again gain more influence later in the nineteenth century).

On August 10, Gould was Masonically "healed" through a process of receiving a certificate (shown at the left) signed by Killian Van Rensselaer and Giles F. Yates, becoming a "Sublime Prince of the Royal Secret", or 32nd degree Scottish Rite Mason in the Northern Masonic Jurisdiction of the United States.  By September 16, 1849, a resolution was adopted by the Supreme Council of the Northern Masonic Jurisdiction in which they agreed to charter the four Scottish Rite bodies in Newport.

Van Rensselaer and Yates signed this "Certificate of Healing" (as shown below), which "healed", or "regularized" a Cerneau Scottish Rite Mason.  This certificate proclaimed that Nathan H. Gould and the other eleven Newport Scottish Rite Masons were made 32nd degree Masons, or "Sublime Princes of the Royal Secret."  In the eyes of the Supreme Council, Northern Masonic Jurisdiction, they were 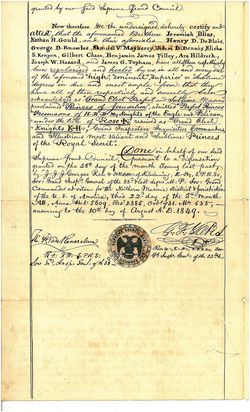 It is interesting to note that in 1998, that the Scottish Rite Masonic Museum and Library purchased the documents relating to Gould's Masonic "healing" and his rise through the ranks in Scottish Rite from Robert B. Morris, Jr. of Forth Worth, Texas.