A Brittle and Torn Manuscript: Conservation of an early Scottish Rite Patent 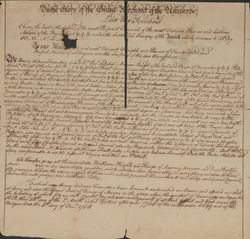 In selecting an item for conservation this spring, I chose a Scottish Rite patent from Henry Andrew Francken (1720-1795) to Moses Michael Hays (1739-1805). The document was in poor condition. Up until the mid-19th century, paper was generally made from linen and rags, materials which contribute to their physical integrity and longevity. The later nineteenth-century practice of adding cheaper wood pulp in the paper-making practice is what contributes to the type of brittle paper that we usually attribute to many late 19th-century newspapers, books, and other documents. (For more on this topic, and other factors that contribute toward paper deteriorating, check out the Library of Congress's helpful page on the subject). Despite being from a period when we might expect paper to be strong, the Hays patent was very brittle because the iron gall ink had burned through the document in several places. In addition, there were many tears and breaks along the folds of the manuscript and the upper left portion of the manuscript was detached (see photo at left).

In anticipation of the upcoming 200th anniversary (1813-2013) of the birth of the Supreme Council, Northern Masonic Jurisdiction, Ancient Accepted Scottish Rite, I selected this document for conservation.  This is a very early and important Scottish Rite patent, a manuscript copy in Hays' handwriting, and dated 1768. The location of Francken's original patent to Hays is unknown. On December 6, 1768, Francken appointed Hays to be a Deputy Inspector General for the West Indies and North America.  This appointment and patent gave Hays the authority to confer the degrees of the Order of the Royal Secret upon selected Master Masons. The twenty-five degrees of the Order of the Royal Secret (often called the Rite of Perfection) was a precursor to the Scottish Rite, which was officially formed in 1801. Hays, born to a Dutch family in New York, lived in New York City at the time that Francken deputized him. A year later, in 1769, Hays was made the first Master of the newly formed King David's Lodge, a lodge whose namesake reflects the Jewish faith of its first officers (the silversmith Myer Myers was Senior Warden, and Isaac Moses was Junior Warden). Hays later relocated to Newport Rhode Island and then Boston. Hays served as Grand Master Massachusetts Grand Lodge from 1788-92.

The document was taken to the Northeast Document Conservation Center (NEDCC) in Andover, Massachusetts, which specializes in preservation and conservation of paper-based objects. Here, their trained professionals cleaned the document using dry cleaning techniques to reduce surface soil.  Then, the document was immersed in a filtered water and alcohol bath to clean the paper and reduce acidity.  After this, the item was alkalized (or deacidified) with a calcium hydroxide solution.  The document was later backed with Japanese paper and wheat starch paste to mend tears and fill in losses to provide overall support.  Lastly, it was humidified again and dried flat between blotters under light pressure.

When the document was completely dry, it was encapsulated in a polyester film (Melinex) to protect against dirt, handling, and atmospheric pollution (see photo at right).  This important manuscript can now be viewed and studied in preparation for the 200th anniversary of the Supreme Council.

New to the Collection: Ladle by Myer Myers 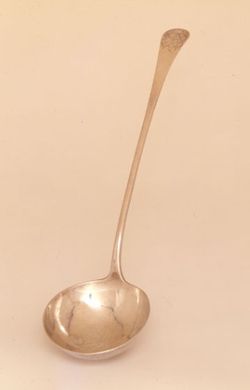 Paul Revere’s (1734-1818) work as a silversmith is celebrated, yet he was not the only accomplished craftsman in 18th-century America.  A silver ladle made by New York silversmith Myer Myers (1723-1795), now in the National Heritage Museum collection, demonstrates equal skill.

The ladle, engraved with initials “TBS” on the handle,  dates to the 1765-1790 period.  Ladles like this were used to serve both hot and cold liquids; while this piece was probably owned and used in a private household, it is possible that Myers made similar pieces for Masonic lodges where members shared punch.

Jewish silversmith Myer Myers served his apprenticeship in New York City and opened his own shop around 1750.  The city experienced prosperity during the pre-Revolutionary decades and had no shortage of well-to-do patrons who could afford fine silver.  Myers was extremely productive and found unique ways to build his business.  He was the first New York silversmith to use a surname mark, which provided name recognition when his silver was used by its purchasers.  He was also the first New York silversmith to form a partnership with another silversmith, an innovative business strategy at the time.  During the Revolution, Myers actively supported the American patriots, but did not fight in the War himself.  He moved his family to Norwalk, Connecticut to keep them out of harm’s way and continued his silversmithing business there to support himself, his wife and his thirteen children.

Myers became a Mason in New York in the 1760s, and was a member of King David’s Lodge.  Through his sister’s marriage, Myers was brother-in-law to Moses Michael Hays, who served as Grand Master of the Massachusetts (Independent) Grand Lodge from 1788 to 1792.