Freemasonry and the Early Mormons 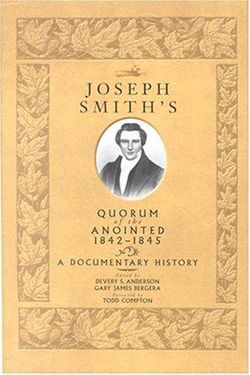 Mormonism is a religion founded by Joseph Smith in the late 1820s and known more formally as the Jesus Christ Church of Latter Day Saints (LDS). Freemasonry is a fraternal organization that traces its modern roots to the establishment of the Grand Lodge of England in 1717. Arguably, what both groups share is a history of having been misunderstood and misrepresented in the culture at large. In both cases, much of this misunderstanding revolves around perceptions of secrecy and initiation rituals.

Which brings us to the often-asked question of whether Joseph Smith - prophet of a religion that was born in both the temporal and geographical heart of a late 1820s anti-Masonic movement that followed the "Morgan Affair" - was influenced by Masonic initiation rituals when he established the LDS "endowment" ceremonies, especially those in Nauvoo, Illinois in 1842.

In 1839, after having been expelled from Missouri, Joseph Smith and his fellow Mormon pioneers purchased land along the Mississippi River in Illinois. They named the town Nauvoo. Nauvoo was the center of early Mormon activity from its inception in 1839 until the murder of Joseph Smith and his brother Hyrum in 1844. During this five year period, three Masonic lodges were founded in Nauvoo. The lodges members were all LDS members, drawn exclusively from Nauvoo's Mormon community. The largest of these lodges, with a membership exceeding 1,500, was called Nauvoo Lodge. The initial expanded endowment ceremonies in 1842 took place in the same second-floor room above Joseph Smith's store that Smith and others were initiated into Freemasonry a few months before. In short, there was a lot of Mormon and Masonic activity in Nauvoo.

For researchers interested in the topic of Freemasonry and the early Mormons in Nauvoo, it can be hard to know where to start. Perhaps the best starting place is Michael W. Homer's 1994 essay, "'Similarity of Priesthood in Masonry': The Relationship Between Freemasonry and Mormonism" (available online). Homer takes a thoughtful, dispassionate view of the subject, noting that an exploration of Masonic influence does not necessarily negate belief. Near the beginning of his essay, Homer opens the door on the topic by writing, "while there is room for belief, there is also room to accept the candor of [LDS-founder Joseph] Smith and others that there was a close connection between Freemasonry and Mormonism."

Homer goes on to write about how the topic of influence has been both overstated and understated by many writers:

"Those who deny any relationship, or argue that similarities between the two are superficial, are concerned that Joseph Smith’s use of Masonic rites is inconsistent with his prophetic claims. Others concentrate on similarities to buttress claims that Smith borrowed heavily from Freemasonry without the benefit of inspiration. This “all-or-nothing” approach combines with the secrecy associated with the rituals to create a reluctance to discuss the subject in any meaningful detail."

The works listed below - all in the collection of the Van Gorden-Williams Library and Archives - are further resources for those interested in dispassionate, primary-source based books related to this topic. Mervin B. Hogan published a number of works on the topic in the 1970s and 1980s. I only list two works by Hogan below. Both are transcriptions of primary sources - the minutes of Nauvoo Lodge, a Masonic lodge founded at Nauvoo, whose members consisted entirely of early Mormons who established the LDS community in Nauvoo, Illinois.

The other books listed below are more recently published and all focus on early Mormonism, with an emphasis on the development of LDS Temple worship. Some are "documentary" histories that draw on a vast trove of early Mormon primary source material. All of these books touch on the interesting question of the influence of Freemasonry on Joseph Smith as well as the popularity of Freemasonry at Nauvoo.