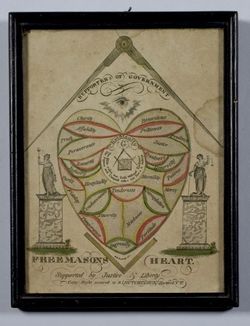 In late 2013, when Supreme Council staff packed up to move down to their new offices inside the Scottish Rite Masonic Museum & Library building, a number of treasures were found in storage spaces and were added to the Museum’s collection.  One of the oldest items discovered was this engraving titled “Freemasons Heart.”  Dating to about 1820, the engraving depicts a large heart under compasses and an all-seeing eye and flanked by allegorical figures of Liberty and Justice.  The heart is divided into sections, each labeled with a virtue central to Masonic teachings, such as fidelity, mercy and charity.  At the center of the heart is a space marked “Christianity” with a G and square and compasses emblem on a Bible.  A verse below the Bible reads “The Bible rules our faith without factions, the square and compass rules our lives and actions.”

When we add a new object to our collection, we catalog it into our database system so we can track it for use in our exhibitions, programs and publications.  We try to do as much research as we can, although that can be an ongoing process, as it will be for this print.  We have learned some history about it, but we still have a number of questions that require further study.  Unfortunately, we do not know much about who originally owned this particular example.  A handwritten inscription on the back of the frame reads “Cap. Joseph Burnett, Stowe, Vermont.”  Possibly, this is the Joseph Burnett born in 1816 who died in 1875, but additional research is needed to conclusively identify him.  It does make sense that the engraving would have been owned in Vermont because the engraver and publisher produced this print in that state.

Engraver Moody Morse Peabody (1789-1866) and publisher Ebenezer Hutchinson worked together in the Quechee area of Vermont, near the New Hampshire border.  As early as 1819, the two men produced a map of Massachusetts, Connecticut and Rhode Island.  Additional research is ongoing about the lives of these two men.  Scholars George R. Dalphin and Marcus A. McCorison were able to track Peabody, who was born in Peterborough, New Hampshire, to Vermont and then to Whitehall, New York, in 1826.  Later he moved to Utica, New York, where he was listed in city directories from 1828 to 1840 as an engraver and copperplate printer.  He died in Ontario, Canada, in 1866.  Less information is currently known about Hutchinson; there are a couple of men with this name in the same general area around the time he was active, so it is difficult to know which one he was.

It seems likely that Hutchinson and Peabody were Freemasons.  The Grand Lodge of Massachusetts collection, on extended loan to the Scottish Rite Masonic Museum & Library, includes an engraved Royal Arch apron that is signed “Printed and Sold by E. Hutchinson Hartford Queechy Village VT.”  Masonic scholar Kent Walgren found an 1820 advertisement in the Vermont Republican newspaper for Peabody who was selling Masonic aprons and diplomas through Hutchinson.  Walgren also suggests that the inclusion of the motto “Supporters of Government” at the top of the print may allude to the Illuminati scare of the late 1790s.  In an attempt to win back public approval and explain that American Freemasons were not part of the alleged Illuminati plot, the printmakers noted that they backed government.  If you know of other Masonic prints by Ebenezer Hutchinson or Moody Morse Peabody, please let us know by writing a comment below!