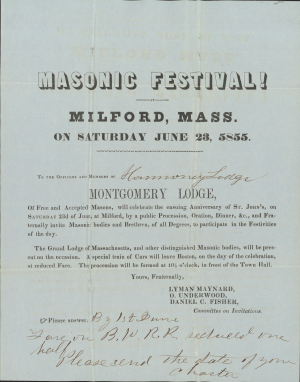 Montgomery Lodge, located in Milford, Massachusetts, sent this invitation out to a number of Masonic lodges, inviting them to a St. John's Day celebration that they were planning for Saturday, June 23, 1855. This particular notice was sent to Richard Colton, Master of Harmony Lodge, inviting him, the officers and members of the lodge to the Masonic festival hosted by Montgomery Lodge. A handwritten notice at the bottom of the invitation reads "Fare on B.W.R.R. reduced one half. Please send date of your charter." While it is not clear why Montgomery Lodge was requesting the charter date for lodges that it invited, it is clear that they had arranged for half-fare tickets for those invitees traveling on the Boston & Worcester railroad line.

A detailed, 8-page account of the day's events was published in the August 1855 issue of Freemason's Monthly Magazine. The event was large - "probably between four and five hundred Brethren in the procession" - and the food and drink clearly left a lot to be desired. The article was hardly without editorial comments. While praising the day's events - "We heard but one expression among the audience, — that of hearty approval and gratification" - the writer also had a few choice words about the meal that was served after the church services, while also making it clear that he doesn't usually expect much in the way of good food on "such occasions":

After the Benediction the procession was again formed and marched to the new Town Hall, where the tables were spread with the worst dinner we ever sat down to; and we have often been severely tried in this interesting particular, — albeit we are not usually very fastidious on such occasions. Experience has pretty effectually cured us of all such nonsense; but there is a point at which the gastronomic organs revolt! We give the caterer for this occasion, the credit of having reached that point of physical sufferance!

Making dinner speeches on empty stomachs, and drinking toasts in turpentine water, is a rather hazardous experiment! Nevertheless, some of the Brethren present had the courage to attempt it, and under the able presidency of Col. Thompson, succeeded to great satisfaction, and, probably, to their own astonishment! Among the number was the M. W. Grand Master, Dr. [Winslow] Lewis [Jr.], who, in response to a complimentary toast to the Grand Lodge, spoke substantially as follows...[Curious readers may read Lewis's speech here.]

St. John's Day, the June celebration of the birth of St. John the Baptist, has a long tradition in Freemasonry. As early as 1739, the day was well-known enough that Joseph Green (1706-1780) published a satirical anti-Masonic poem about it. A broadside publication of that poem can also be found on our Digital Collections website.