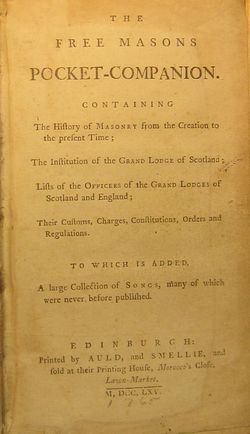 What's the Difference Between a Monitor and a Ritual Book?

Masonic libraries, like the Van Gorden-Williams Library and Archives, have multiple editions of various books that are called "monitors," and which, at first glance, look a lot like books that contain Masonic rituals. So what's the difference between a monitor and a ritual book? 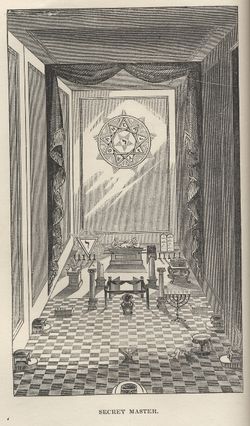 It might help to start with an analogy. One can think of Masonic degree ritual as a sort of morality play, in which the candidate is the main protagonist and other members of the lodge take on other dramatic roles in the cast. (This is more true of Scottish Rite ritual than other Masonic ritual, but all Masonic ritual is presented in a dramatic form.) Ritual books contain the scripts to these "plays," and contain material that is considered either secret or not intended for non-members. Monitors, on the other hand, contain the non-secret excerpts of rituals, lectures, and other ceremonies, and are sometimes a bit more like the CliffsNotes or SparkNotes version of the play. In other words, monitors include extracts of parts of Masonic ritual that, when read, may give the reader a general sense of the ritual while including neither the text of the ritual itself, nor the passwords, signs, grips, etc. that are a part of what Masons pledge not to reveal to non-Masons. Most monitors, however, presume a familiarity with Masonic ritual, so the average reader may still find reading a monitor a somewhat confusing adventure. Historians interested in Freemasonry can use monitors to see how Masonic ritual has changed over time.

Monitors exist for the Craft degrees (i.e. the first three degrees), Scottish Rite, York Rite, and various other degrees. Monitors of Scottish Rite ritual often include descriptions of how the lodge room or stage is decorated and often contain an outline of the narrative story of the degree. Monitors of the Craft degrees usually contain excerpts from the various "lectures" in which the metaphorical meaning of various Masonic symbols is explained. An example of this can be found in the description of the plumb, level, and square in a monitor published in 1861:

The Plumb admonishes us to walk uprightly in our several stations before God and man, squaring our actions by the Square of our virtue, and remembering that we are traveling upon the Level of time, to that undiscovered country, from whose bourn [i.e. destination] no traveler returns. 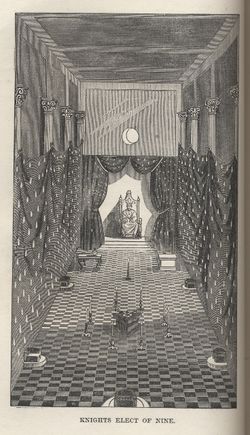 McClenachan's monitor provides a peek into what Scottish Rite degrees were like almost 150 years ago. It might surprise Scottish Rite Masons today to find that in those days, Scottish Rite ritual was not staged in a theater setting (that innovation came a bit later), but took place in the same kind of rectangular lodge room in which the Craft degrees are held. The illustrations seen here are from McClenachan's monitor, and show an artist's rendering of how the lodge room was to be decorated for the Fourth Degree, Secret Master (above, left) and the Ninth Degree, Knights Elect of Nine (above, right). It's worth noting that these depictions don't represent current Scottish Rite ritual in the Northern Masonic Jurisdiction. In fact, as Arturo de Hoyos has pointed out, ritual in the Northern Masonic Jurisdiction has changed so often over the years, that a mere three years after the publication of McClenachan's book it was already outdated.