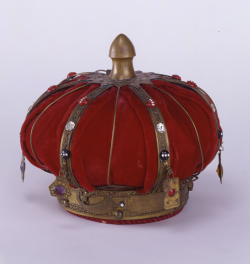 One hundred years ago, Freemason Frank S. Land (1890-1959) founded the Order of DeMolay in 1919 in Kansas City, Missouri, at the age of 28. After the initial formation of the youth club, Land and other early members named the group after Jacques DeMolay (1243-1314) and met regularly at the Kansas City Masonic Temple. The Order was open to young men aged 16 to 21.The success and popularity of the original DeMolay group spurred members to set up chapters across the country.

When Land died in 1959, there were 135,000 DeMolay members and 2,097 chapters in 14 countries. Local chapters were and still are sponsored by a Masonic organization. Several objects related to DeMolay history will be on display at the Museum & Library through December 2019 as the organization celebrates its centennial anniversary in more than 15 countries worldwide.

Another object in the collection, a recently donated 1964 panoramic photograph, shows over one hundred DeMolay members and advisers at a Colorado DeMolay leadership camp outside Estes Park, Colorado. The first DeMolay National Leader's Training Camp was held at Bear Lake Lodge, Colorado, in 1924.

1964 New Jersey Past State Master Councilor Thomas C. Richard gave this photograph to current Sovereign Grand Commander, David Glattly, who then donated it to the Museum.

Visit the Museum & Library to see more DeMolay items from the collection! Do you or a family member have photographs or items related to DeMolay? We want to hear from you. Leave a comment in the section below.