A Baseball-Playing Mason in 1887 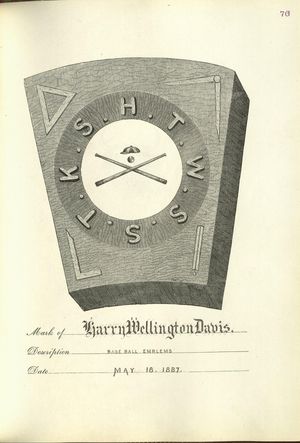 I was recently looking at a volume of Menotomy Royal Arch Chapter's Book of Marks, which is in our Library & Archives collection. The book contains the "marks" of 175 members of Menotomy Royal Arch Chapter, between January 21, 1867 and October 6, 1897. I was particularly intrigued by Harry Wellington Davis's mark, pictured here, which suggests that when Davis joined the Chapter in 1887, he had a strong interest or connection to baseball.

The Mark Master degree is conferred in Royal Arch Chapters. As part of the degree, each candidate selects a unique, personal “mark,” an allusion to the marks that working stonemasons left on medieval stone work. Marks selected for the Mark Master degree often represent or incorporate a Mason’s name or occupation, or feature Masonic symbols. Sometimes they reveal an interest, hobby, or other avocational passion.

Curious about Davis's baseball emblem "mark," I dug a little deeper to see what I could find.

Harry Wellington Davis (1863-1943) was a salesman who was born and lived in Lexington, Massachusetts. In 1886 he petitioned Simon W. Robinson Lodge, the local Masonic lodge, and was raised a Master Mason on February 7, 1887. In 1887, Lexington did not have its own Royal Arch Chapter, so Lexington Masons would have to have joined Menotomy Royal Arch Chapter in Arlington, the next town over. Menotomy Chapter was named after the old name for the town it was founded in - Menotomy, later known as West Cambridge, renamed itself Arlington in 1867, as a memorial to the Civil War dead buried in Arlington National Cemetery. Davis was one of only six members who joined the Chapter in 1887.

But what about those baseball emblems? A quick internet search turned up an 1887 photograph of the Lexington Baseball Team. The photograph - which is part of the Worthen Collection at Cary Memorial Library in Lexington, Massachusetts - reveals that Harry W. Davis was, in fact, a member of the team in 1887. He is pictured in the middle row, far right, in the 1887 photo.

When Davis died in 1943, he had been a Mason for fifty-six years. He was posthumously awarded the Grand Lodge of Massachusetts' Veterans Medal.