The History of New-Hampshire: Enter Lydia Phillips and Mathew Carey

Last week and the week before, we talked about our copies of the first two volumes of Jeremy Belknap's The History of New-Hampshire. Today, we continue looking at the book, especially at the paper label that is pasted on the inside of the front cover of each of the two volumes.

Our story was left hanging in July 1811, with the death of John Phillips, who had been the proprietor of Phillips Circulating Library for the previous eleven years. Lydia Phillips, John's widow, placed an advertisement on July 15, just ten days after his death. The ad below appeared in the August 16, 1811 edition of Poulson's American Daily Advertiser, with its heart-breaking appeal to the good will of others: 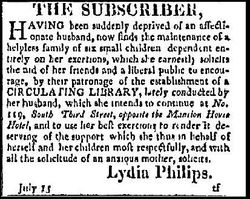 [Transcription: The Subscriber [i.e. Lydia Phillips], having been suddenly deprived of an affectionate husband, now finds the maintenance of a helpless family of six small children dependent entirely on her exertions, which she earnestly solicits the aid of her friends and a liberal public to encourage, by their patronage of the establishment of a Circulating Library, lately conducted by her husband, which she intends to continue at No. 119, South Third Street, opposite the Mansion House Hotel, and to use her best exertions to render it deserving of the support which she thus in behalf of herself and her children most respectfully and with all the solicitude of an anxious mother, solicits.]

Despite the desperate tone above, things appear to have worked out for Mrs. Phillips. A year later, an advertisement stated that “Mrs. Phillips returns her sincere thanks to her friends and the public, for their generous patronage and hopes to merit a continuance of their favor, by procuring all the NEW WORKS that can be obtained…” She then goes on to mention some new books that have arrived, including a novel called Sense and Sensibility, which had just been published in London and was arriving by ship to American bookstores and circulating libraries.

We now fast-forward to 1820, twenty years after John Phillips founded his circulating library. Mrs. Phillips Circulating Library was clearly still in business at the time, as I found an ad for “Mr. Willis’s Concert,” which mentions that tickets cost $1 and could be had at both Mathew Cary & Son’s Bookstore and Mrs. Phillips’s Circulating Library. Mathew Carey was, among other things, one of the leading publishers in Philadelphia in the early 19th century. (Like John Phillips, Carey was also a Freemason. He also happened to be Catholic, and published Spanish-language Masonic books in Philadelphia in the 1820s.) 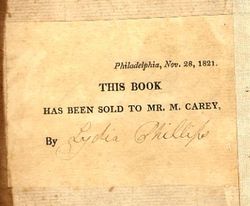 Which brings us back to our book and this label, which indicates that Lydia Phillips sold this book to Mathew Carey in Philadelphia on November 28, 1821.(Incidentally, this was published in three volumes, but we only own volumes I & II.) As to the specific circumstances surrounding the sale of this book, I have not yet found anything conclusive. But let’s take a quick, closer look at the label. It is interesting to note that, except for Lydia Phillips’ name, everything on the label is printed, and not handwritten. One might assume that that Carey printed these labels and put them in books he was purchasing at the time. But what’s so curious about this label, though, is that the date is also printed, not written, in. This leads me to believe that Carey purchased a number of books on November 28, 1821. I can’t think of why else would he would print the labels with a specific date. (Any thoughts, readers?)

One possibility is that Carey planned on purchasing a number of books at a book auction in Philadelphia on that day. It’s also possible that he may have purchased all or most of Lydia Phillips’ stock from her. If it didn’t have the date, or if the date was written in, I’d assume that Carey perhaps regularly kept these blanks on hand and brought them out when he purchased a book that had someone else’s markings in it. As for why Phillips name is written in, it’s possible that her signature was another way of authenticating his ownership, or simply that he bought from many people on that day and simply had them fill in their names. This, obviously, will require further research.

A couple of final notes, with regard to Carey purchasing this book from Lydia Phillips. I talked to James N. Green, librarian at the Library Company of Philadelphia, and he informed me that an 1822 printed Catalogue of the Library of M. Carey, Philadelphia, Belknap’s 3-volume History of New-Hampshire is listed. We can’t say conclusively, although it seems quite possible, that it may be these volumes bought from Lydia Phillips.

As to the fate of the Phillips Circulating Library, the 1821 and 1822 Philadelphia city directories list Lydia Phillips’ name and “circulating library, &c.” with an address of 119 S. Third St. In the 1823 directory, however, we see that she has moved to 182 Mulberry St. and an occupation is no longer listed.

You can preview two interesting essays about Mathew Carey's publishing business as it relates to Masonry in the book Freemasonry in Context: History, Ritual, Controversy, edited by Arturo de Hoyos and S. Brent Morris, which reprints articles previously published in Heredom:

You can also take a look at that book, as well as all issues of Heredom, in our library:

Info about our two volumes of The History of New-Hampshire: