Is this woman a Freemason? It depends who you ask. 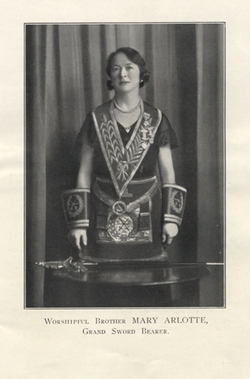 In the world of Freemasonry, 'recognition' and 'regularity' are important. Some Masonic bodies don't 'recognize' other Masonic bodies because they consider them 'irregular.' That is, one Masonic organization will not - for various reasons - consider another Masonic organization legitimate.  Tony Pope explains the concepts of 'regularity' and 'recognition' fairly succinctly in his essay At a Perpetual Distance: Liberal and Adogmatic Grand Lodges, and so I quote him briefly:

Every autonomous Masonic body has its own tests of regularity, based on its perception of its own character. Thus, each Grand Lodge considers itself to be regular, and requires its constituents to abide by its criteria, whether clearly defined or not. Consequently, every Mason considers himself to be regular because he (or even she!) was ‘regularly’ initiated in a ‘regularly’ constituted lodge, chartered by his (or, indeed, her) Grand Lodge."

If two autonomous Grand Lodges wish to establish and maintain a fraternal relationship with each other, it is customary for them to ‘recognise’ each other by formal treaty. This usually involves a comparison of the two systems, to determine if they meet each other’s criteria for recognition. Each Grand Lodge has its own list of requirements which, in most cases, may be summarised as follows:

(a) Regularity of origin;

(b) Regularity of conduct; and

I think that Tony Pope's explanation is fairly clear, but if not, here's a real-world example: let's say you join the American Federation of The Order of International Co-Freemasonry (a.k.a. Le Droit Humain). You will consider yourself a legitimate Mason, the body which conferred degrees upon you considers itself perfectly legitimate, and you may know other men and women who consider themselves Masons and who will consider you a Mason. Yet there will be other Masonic bodies (e.g. any of the "mainstream" Grand Lodges in most U.S. states) that will not consider you a Mason. This is because there is no formal recognition between, say, the Grand Lodge of Pennsylvania and The Order of International Co-Freemasonry. (Curious about who the Grand Lodge of Pennsylvania does recognize? They maintain a list of Grand Lodges that they recognize on their website.)

So why do I bring up such a confusing subject?  To educate, of course!

More to the point, I bring this all up to mention that our Library & Archives collects broadly about the world of Freemasonry. Because we are interested in giving researchers the ability to look at the history of Freemasonry and fraternalism in its entirety, our Library & Archives collects broadly in both Freemasonry and other fraternal groups (focusing especially on Freemasonry and fraternalism in the United States), so our collections contain publications by and about any number of different Masonic organizations. Some of these organizations admit just men, some both men and women, and some just women.

While we'll refer you to a particular Masonic body if you've got specific questions about whether one Masonic body recognizes another or considers them regular, we'd be happy to assist you with learning and conducting research on any aspect of Freemasonry - whether you consider it regular or irregular.

The photo above shows Worshipful Brother Mary Arlotte, Grand Sword Bearer. It's from the May 1933 edition of The Ray, a magazine published by The Honourable Fraternity of Ancient Freemasons. (And, yes, members of this self-described "masonic fraternity of women in the U.K." do refer to each other as Brother, something that they address on their FAQ page.) This organization is not recognized by a lot of the "mainstream" Masonic bodies, and I include it as an example of something that might be surprising and eye-opening to folks who know little about the rather large world of Freemasonry in general. If you're curious about women and Freemasonry and you're in London, you might want to check out an exhibition called Women and Freemasonry: The Centenary, that's currently on view at the The Library and Museum of Freemasonry.