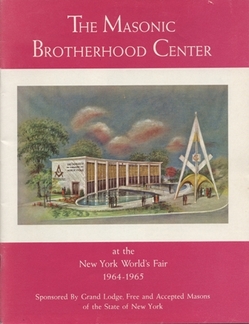 Lots of folks have memories of the 1964-65 World's Fair, held in the borough of Queens in New York City, and recognized by the Fair's memorable icon, the Unisphere. There were lots of popular pavilions and attractions at the Fair, ranging from the memorable - like General Electric's Progressland (developed by Walt Disney and later transplanted to Disneyland as the Carousel of Progress) - to the perhaps less-than-memorable, like the AARP's Dynamic Maturity pavilion.

But did you know that there was also a Masonic pavilion at the 1964-65 World's Fair? The theme of the Fair was "peace through understanding," and so it seems a natural fit that the Grand Lodge of New York decided to sponsor The Masonic Brotherhood Center, with its theme of "Brotherhood: the Foundation of World Peace."

If you go to Flushing Meadows Corona Park in Queens today, you can still see the Unisphere as well as the Tent of Tomorrow, but you won't find too much of the 1964-65 World's Fair beyond that - certainly not those huge square-and-compasses. (Although I'm happy to report that our colleagues over at the Livingston Library at the Grand Lodge of New York inform us that those great space-age square-and-compasses still survive.)

If you've got memories of The Masonic Brotherhood Pavilion, we'd love to hear about them - just share them in the comments below.

Pictured above is a small booklet produced by the Grand Lodge of New York for the World's Fair: