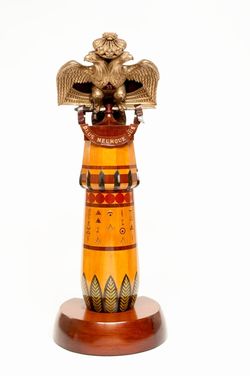 2013 marks the 200th anniversary of the founding of the parent organization for the Scottish Rite Masonic Museum & Library.  In 1813, the Scottish Rite Supreme Council for the Northern Masonic Jurisdiction, USA, was formed.  Over the coming months, you will read more about this anniversary and the history of the Northern Masonic Jurisdiction on our blog.  We will also open an exhibition about the NMJ next spring (check our website for details as Spring 2013 approaches!).

The Museum & Library actively collects objects and documents from the Scottish Rite.  Many of the objects already in our collection are gifts from a Scottish Rite member or local group to the governing body, the Supreme Council, which is located in Lexington, Massachusetts, on the same campus as the Museum.

One of the most eyecatching gifts now in the collection is a lectern that was presented to the Supreme Council in 1931 by the DeWitt Clinton Consistory of the Valley of Grand Rapids, Michigan.  Constructed from several different woods, and inlaid with miniature Masonic symbols, the lectern shows an Egyptian Revival style and sports a book holder at top supported by the Scottish Rite's double-headed eagle symbol.  A silver plaque on the lectern credits the design of the piece to Edgar A. Somes, the inlay to T.A. Conti, and the fabrication to Century Furniture Company and Associates.  Grand Rapids, Michigan, was a center of American furnituremaking during the late 1800s and early 1900s; the pride that makers took in their craft is evident from this lectern. 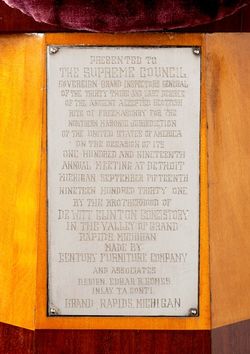 The lectern was presented to Commander Leon M. Abbott at the Northern Masonic Jurisdiction's 1931 annual meeting in Detroit, Michigan.  At the meeting, a representative from Michigan explained that the Egyptian style was chosen because of its connection to Masonic rituals and symbols.

New to the Collection: A Masonic Cupboard from Indiana 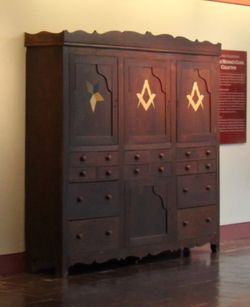 Over the summer in 2010, we were alerted to the availability of this Masonic cupboard, which reportedly came from the “old Masonic Hall” in Madison, Indiana, but had most recently been part of a private collection in Ohio. After some negotiations, the Scottish Rite Masonic Museum & Library purchased the cupboard for its collection and had it transported to Lexington, Massachusetts.

We are always on the lookout for Masonic furniture, especially if it is accompanied by a story or documentation of its previous use. We were very excited to add the cupboard to our collection – we do not have another piece like it, nor do we have many pieces of Masonic furniture from the Midwestern United States. The symbols on the doors suggest that the local Order of the Eastern Star group organized their papers in one section, while the town’s Masonic lodge used the other two. Pencil notations remain inside over some of the dividers to remind previous users about which types of papers went where. A new Masonic building was constructed in Madison, Indiana, in 1871 and the cupboard may have been made or purchased around that time. 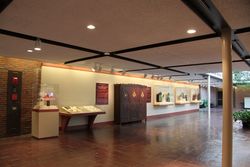 The cupboard has recently been placed on view in the Museum’s lobby area as part of a new exhibition of recent acquisitions for the collection (see the photograph at right). The Museum actively works to improve and refine its collection of over 17,000 objects through gifts and purchases. The new display highlights some of our recent acquisitions in order to recognize our donors and to demonstrate the kinds of things that we collect. We plan to rotate these objects once or twice a year. We hope you will plan a visit to the Museum soon – and then leave a comment here about your favorite recent acquisition!