"Expel him and expel him quickly": A Union response to a Brother joining the Confederate Army 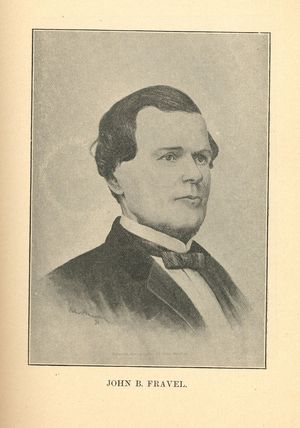 In a previous post, we took a look at Masonic Confederate imprints in the Van Gorden-Williams Library and Archives's collection. In the world of bibliography and rare books there's really no such thing as a "Union imprint" but I thought it'd be worth dipping into some Proceedings published by Masonic bodies in the Union during the Civil War to see what interesting topics might turn up. It didn't take long before I found something quite interesting. Namely, the thorny question of whether a Mason belonging to a lodge in the Union should be kicked out of his lodge if he heads south and joins the Confederate Army. As you will see below, there were differing opinions on how to address this real-life issue.

In the 1863 Proceedings of the Grand Lodge of Indiana, the "Address" by Grand Master John B. Fravel (1814-1876) looked at the question of whether a Mason who left the Union to join the Confederate Army should automatically be expelled from Freemasonry. His opinion on the matter appears below the heading Decision as to the Expulsion of a Disloyal Mason and is focused on an actual case, brought to him by the Master of a lodge in Allensville, Indiana:

On the 12th of July, 1862, the Worshipful Master of Allensville Lodge, No. 81 submitted to me the following question:

"A Brother in good standing in this Lodge has gone South, joined the Confederate Army, received a commission therein, and is now in arms against the Government of the United States. Can the Lodge expel him?"

My answer was that for that act alone, he could not be expelled. This decision is founded upon the express declarations set forth in the Second Chapter of the Ancient Charges...

Fravel then goes on to quote the passage, and ends by saying, "This question possesses much interest to us at this particular time; and as such I esteem it to be my duty to lay the whole matter before the Grand Lodge, not that I apprehend in the least that they will reverse the decision made, but that the Craft may know the precise position which we, as Masons, occupy to the legally constituted Government."

Despite Fravel's belief that no one in the Grand Lodge would reverse his decision, there was, in fact, a strongly worded response to Fravel in the "Reports from the Committee on Masonic Jurisprudence," which contained a section entitled, On Expulsion of Disloyal Brethren. After a polite introduction, in which the Committee states that the matter was referred to them by the Grand Master and that while he "quoted the law as anciently recognized correctly," they did not believe that "in the decision, as reported by the M.W. Grand Master, the law is correctly applied." The report goes on to ask that if Canada or Mexico "should call together a large army, and with munitions of war advancing towards our borders, threatening to burn and destroy our cities, lay waste to our country and rob and murder our citizens," whether the Grand Master would rule the same way as he did with regard to the Confederacy.

The report ends with little question as to what the Committee on Masonic Jurisprudence thought should be done with a Mason who left the Union and joined the Confederate Army. The heat of the language makes clear how strongly passions burned on this topic in 1863:

Expel him and expel him quickly; and should you ever catch him engaged in his unholy purposes, treat him just as you would the assassin who, in the dead hour of night, would, with stealth, enter your bed-chamber, and there, while carrying out his purposes of robbery, plunge the dagger to the heart of the wife reposing on your bosom.

Your Committee deny, in the most emphatic terms, that there is any law of Masonry contravening or setting aside the first law of nature, 'Self-Preservation.'

As can be seen from the example above, although Masons met during the Civil War, the war was never far from their minds - and sometimes called upon them to address questions unique to this period of American history.