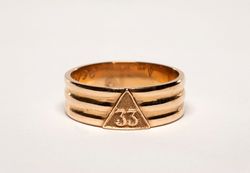 Opening June 15, 2013, the exhibition uses more than 100 objects and images to tell the story of the Northern Masonic Jurisdiction. While most people assume that the Scottish Rite began in Scotland, it was actually founded in France in the mid-1700s. Early groups met in the West Indies, eventually taking root in New York, New Orleans, and Philadelphia. 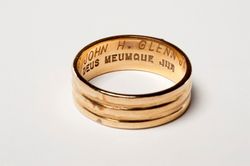 Among the objects on view is the 33rd degree ring originally owned by astronaut and Freemason John H. Glenn Jr. (b. 1921). The first American to orbit the earth, in 1962, Glenn circled the planet three times in the Mercury capsule Friendship 7. After retiring from the Marine Corps in 1965, Glenn pursued his interest in politics. Starting in 1974, he served Ohio for four consecutive terms in the United States Senate. The Grand Master of Ohio made John Glenn a Mason at sight in 1978. In 1998, soon after Glenn received the Scottish Rite’s 33rd degree, conferred on selected members as a high honor, he wore this ring when he returned to space in the shuttle Discovery.  On the journey he became the oldest American to participate in a NASA mission.

Starting Saturday, June 15, 2013, the exhibition will be open Wednesday through Saturday, 10 a.m. to 4:30 p.m. On June 15, 2013, at 2 p.m., Aimee E. Newell, the museum’s Director of Collections and curator of the exhibition, will give a gallery talk. Please visit www.nationalheritagemuseum.org for more information.

Making a Mason at Sight: The Case of President-Elect Taft 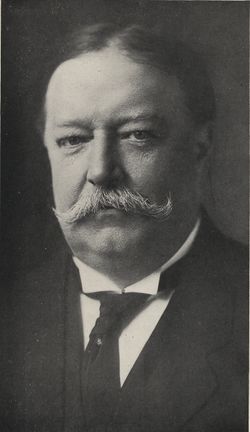 With president-elect Barack Obama waiting to be inaugurated in January, it seems like an opportune moment to look at a previous president-elect and the story of his unusual entry into Freemasonry. William Howard Taft (1857-1930), who served one term as president (1909-1913), is one of the fourteen U.S. Presidents who were also Freemasons.

As we've just come to an election whose campaign lasted about twenty months, it's interesting to note that Taft was elected President during a time when campaigns seemed quaintly short - Taft complained that he disliked the campaign of 1908, stating that it was "one of the most uncomfortable four months of my life." Indeed, despite having served as President of the United States, Taft felt that his greatest accomplishment was having served as Chief Justice of the Supreme Court (he's the only person to have held both offices), a position he was appointed to in 1921 and which he served until his retirement in February 1930, a month before he died.

Freemasonry was a tradition in Taft's family. His father, Alphonso Taft, was a prominent member of Kilwinning Lodge No. 356 in Cincinnati and two of William's brothers had already been raised Masons, in ceremonies that included the participation of their father. But William Howard Taft didn't become a Mason in the traditional way, as his father and brothers did. Instead, he was "made a Mason at sight." But what exactly is making a Mason at sight?

Louis L. Williams (a Masonic historian who was heavily involved with the formation of our library and who is one of the namesakes of our library) writes in his book on the subject, Making a Mason at Sight:

I originally thought that the Grand Master might take the proposed recipient off to the side, or to some private place, and possibly obligate him in one or more degrees, and simply declare him to be a Mason henceforth and thereafter. I was many years a Mason before I learned that under normal procedures the Grand Master would convene an Occasional Lodge, with the requisite number present, and then, by issuing a dispensation for the purpose, proceed to confer all three degrees on the candidate. The Grand Master would waive the petition, balloting, Catechism, and the like, but the degrees themselves were usually conferred in full, including lectures and charges, but usually on the same day, and in proper succession. This is the usual and proper way it is done, although using his unique and unquestionable power, the Grand Master could pretty well proceed as he might see fit.

As Williams points out, the phrase "making a Mason at sight," brings to mind an activity that has a sense of immediacy, rather than something that is planned out, although making a Mason as sight is, generally, a ceremony that is planned out well in advance. (The actual ceremony of making a Mason at sight also has some interesting parallels to contemporary Freemasonry's one-day degree conferrals (a.k.a. Grand Master Classes) which are a hotly debated aspect of Freemasonry today. If you are interested in that topic, there's no shortage of opinion to be found. You can find plenty of arguments made both for and against these classes.)

Taft became a Mason just a few weeks before his inauguration as President on March 4, 1909. On February 18, 1909, the Grand Master of Ohio, Charles S. Hoskinson, convened an Occasional Lodge at the Scottish Rite Cathedral in Cincinnati for the purpose of making the President-elect, William H. Taft, a Mason at sight. Fourteen Grand Masters of other jurisdictions were in attendance, along with many other Masonic dignitaries. Because making a Mason at sight is a relatively rare event (except, perhaps, in Pennsylvania, which Williams refers to as being in a "class by itself" because of the number of Masons that have been made at sight), and because it was being done for a man who was to be sworn in as President of the United States the following month, this was, understandably, a remarkable occasion. The New York Times reported that there were 800 people in attendance, with 2,000 more being turned away. Taft affiliated with Kilwinning Lodge No. 356, the lodge that his father and brothers belonged to.

Yet this event, while widely celebrated, was not without controversy. After Taft was made a Mason at sight, hundreds of letters flooded Masonic magazines, written by Masons who decried the practice of making a Mason at sight. While most Masons appear to have supported Taft's being made a Mason at sight, some Masons were upset. Those who objected appeared to have done so because they believed that the practice went against the whole idea of meeting "on the level" and the tacit agreement that all brothers are equal in the lodge. By singling out a powerful individual to be made a Mason by another arguably powerful individual (the Grand Master), critics contended that this went against the very tenets of the professed equality within the fraternity. Edward M.L. Elhers, Grand Secretary of the Grand Lodge of New York said that while he had great respect for Taft, he censured those involved for the act of making him a Mason at sight, by saying "Princes and paupers stand equal in the eyes of Masonry, and I deprecate the lodge that allows Masonry to fall at the feet of power...it does not matter whether it is President-elect Taft or anyone else, the Cincinnati lodge deserves the severest criticism of all Free Masons."

One might imagine that after becoming a Mason in a ceremony that lasted no more than a couple of hours, and with the duties of being President of the United States, that Taft might not have been an active Freemason. Yet it's interesting to note that on April 22, 1909, just a little over a month after being inaugurated as President, the New York Times reported that President Taft attended a regular session of the Temple Masonic Lodge in Washington, D.C. where he "saw the third degree worked upon several candidates."