All the Way with LBJ! 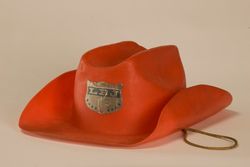 In a previous post, we showed a few of the political textiles in the National Heritage Museum collection.  Recently, we were given an object associated with Lyndon Baines Johnson’s (1908-1973) 1964 campaign – a red plastic Stetson-style cowboy hat.

The silver label on the front shows a steer’s head and the initials LBJ.  The donor and her siblings wore this hat during childhood play, but it probably dates to the 1964 Democratic convention.  During the election that year, Johnson ran against Republican Barry Goldwater (1909-1998).  Johnson’s campaign images focused on his identity as a Texan; he was often photographed wearing a hat like this one.

After the shocking assassination of President John F. Kennedy (1917-1963) in November 1963, Johnson vowed to continue to pursue the slain president’s goals, particularly working on civil rights initiatives.  Johnson gained popularity during the remainder of Kennedy’s term and it was clear early on that he would be victorious in 1964.  The only question was how large the landslide would be.  Indeed, election night 1964 found Johnson the winner, with 61% of the vote and the widest popular margin in history – more than 15 million votes.

Incidentally, Johnson did receive the first Masonic degree, Entered Apprentice, in 1937 at Johnson City Lodge No. 561, Johnson City, Texas.  But he did not receive the second and third degrees, so is not included on the list of U.S. Presidents who were Freemasons.

Roger A. Fischer, Tippecanoe and Trinkets Too: The Material Culture of American Presidential Campaigns, 1828-1984, Urbana: University of Illinois Press, 1988.