Is This a Masonic Painting? 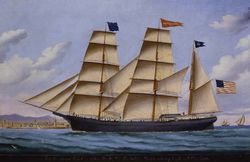 Can you tell what makes this ship painting a “Masonic painting”? Look very closely at the flags it is flying and you’ll be able to make out the square and compasses symbol on the blue one atop the ship’s mizzenmast (third from the left - if you click on the picture, you can see a larger version of the image). One of the most well-known Masonic symbols, the square and compasses signify reason and faith.

The painting depicts the bark Isaac Rich as it entered the port of Leghorn, Italy, in 1876. The artist, Luigi Renault (1845-ca. 1910), was active in Leghorn from 1858 to 1880 and was appointed marine painter to King Victor Emanuel.

Ships might fly a Masonic flag if the owner or the captain were Freemasons. In the case of the Isaac Rich, the ship’s captain, William Bartlett Sheldon (d. 1903), joined New Jersey’s Burlington Lodge No. 32 in 1863. Sheldon served in the U.S. Navy during the Civil War. While Acting Master of the gunboat steamer U.S.S. Flambeau in South Carolina, he was captured in May 1863, but was exchanged in June 1863 and continued serving until October 1865. See our previous post about the preferential treatment that some Masonic prisoners received during that conflict.

If you would like to see the painting in person, please visit our current exhibition, Curators’ Choice: Favorites from the Collection.