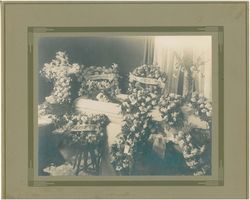 You Can’t Miss It! The Loyal Order of Moose Neon Sign 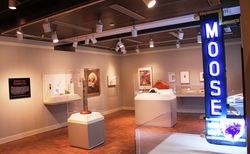 This sign harkens back to an era in which both neon signs and the Loyal Order of Moose populated many American cities.  The museum first purchased and installed it for the 2002 exhibition, To Build and Sustain:  Freemasonry in American Communities.  With vibrant colors and bright lights, this object gave us a chance to illustrate twentieth-century fraternal organizations’ impact, not only on American’s social lives, but also on downtown landscapes.  And, as a staff member notes in Curators’ Choice:  Favorites from the Collection, “This sign is just plain cool!”

Since 2002, we have learned a lot about neon signs at the museum, most notably from our experience displaying and interpreting antique signs from the collection of Dave and Lynn Waller in the exhibition, New England Neon.  Born of a marriage between advertising and science, neon signs have long enlivened American streets.  After their introduction in the mid-1920s, neon signs--inexpensive to operate, colorful and suitable for a variety of designs--trumped previously popular forms of electric signs.  Solid construction, appealing curved shapes and bold, enameled colors mark this neon Moose sign as a great example of the commercially produced neon signs made in the 1930s and 1940s.

When new, this sign advertised Loyal Order of Moose Lodge #1369 in Robinson, Illinois.  Information from

the Museum of Moose History suggests that lodges could purchase these signs from the Supreme Lodge Supply Department of the Moose in the 1930s.  We are also glad to know the manufacturer of this sign, the Swanson-Nunn Electric Co. of Evansville, Indiana, who inscribed their company name along the bottom of the sign.  Not all neon sign companies did, so this information is valuable to us.  As time passes, wear, weather and changing tastes have made neon signs from this era increasingly rare—we count ourselves lucky to have this one to share with visitors.

All Dressed Up: The Loyal Order of Moose 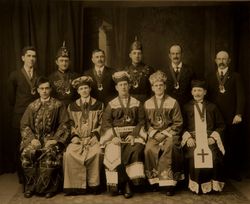 Is this a theater troupe? A group photo at a costume party? Neither – it’s a photograph of members of a fraternal group, dressed in costume for a ritual. Judging by the moose-shaped pendants that they wear, these men probably belonged to the local Loyal Order of Moose lodge in Maynard, Massachusetts.

Originally founded in 1888 in Louisville, Kentucky, the Loyal Order of Moose offered sick benefits to members and worked to construct a school in Illinois to provide vocational training for orphaned children of members. Today, the fraternity has almost 800,000 members in the United States, Canada, Great Britain and Bermuda.

Unfortunately, the National Heritage Museum does not have any Moose costumes in its collection. So, if you have any regalia or items associated with the Loyal Order of Moose and would consider making them a donation to the Museum, please post a comment below or contact us by phone or email.