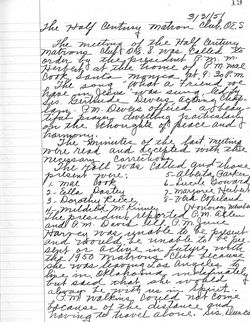 Among the new acquisitions this spring 2012, was a manuscript Minute Book of a Prince Hall affiliated "Half Century Matrons Club" dated from 1950 through 1959.  This club was formed in 1950 by Past Matrons of the Order of Eastern Star, Prince Hall Affiliation from the state of California.  The club took its name, "Half Century Matrons Club", because it was formed in mid-20th century.

According to historian Josh Sides, the 1950s in Los Angeles was a postwar economic and industrial boom time. During World War II, the NAACP (National Association for the Advancement of Colored People) put constant pressure on the federal government to abolish segregation in the armed forces as well as on the homefront workforce.  However, by the 1950s segregation still existed in Los Angeles in industry, in choosing a home, as well as in fraternal groups.

On March 31, 1951, Parker reported to the club that she had consulted with Los Angeles Urban League about deciding on a charity project.  They recommended that because of "racial barriers" the club should focus their energy on assisting needy children at the local high school, as a project, rather than as foster mothers to a child in an orphanage. Unfortuantely, there are no more details in the minute book about the orphanage.

In 1951, Herbert and Parker sat in on an NAACP conference in Los Angeles.  The NAACP was and is the nation's oldest civil rights organization.  Herbert reported to the club that speaker Franklin P. Williams had stressed the point that African Americans and people of color must continue to move forward.  According to sociologist Theda Skocpol, Prince Hall Masons had a long history of collaborating with the NAACP.  As early as the 1920s Prince Hall members encouraged and gave financial support to the NAACP.

According to the minute book, in discussions throughout November and December of 1952, the members of the Half Century Matrons Club decided not to admit Past Patrons from Prince Hall. Herbert reported that she "told P[ast] Patrons as tactfully as she could that the club at this time unless and until the club itself decided to amend its bylaws no past [patron] could be admitted to membership, and that the club hoped he [William Henry] would not feel unwanted or unwelcome."  These women wanted to make their own decisions and keep discussions private.  This was an unusual step at the time, as Past Patrons were admitted to chapters of affiliated OES.

Prince Hall Masons and the affiliated Order of Eastern Star are alive and well in Los Angeles today.  They recently celebrated Prince Hall Day, in September of 2011.

Do you have more information about any of the original Half Century Matrons Club members of Los Angeles?  Please leave a comment if you do.

Skocpol, Theda et al.  What a Mighty Power We Can Be:  African American Fraternal Groups and the Struggle for Racial Equality.  Princeton and Oxford:  Princeton University Press, 2006