"Let's call it Petroleum Lodge!": Or, a guide for naming Masonic lodges 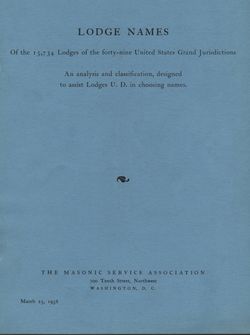 It's 1938 and you and some of your fellow Masons are organizing a new Masonic lodge. Maybe this is because the lodge that you currently belong to has so many members that it's becoming slightly unwieldy and there's enough interested members to form a new lodge. (The average number of members in a Masonic lodge in 1938 was 160.) With the permission of the Grand Lodge in your state, you're granted permission to work as a new lodge "under dispensation" (usually abbreviated to "U.D."), often the step before a lodge gets officially chartered by the Grand Lodge.

Perhaps the first thing that confronts you is a question that you might not have considered. Namely, a name for this new lodge.

Maybe you want to pick a name that no Masonic lodge has used before, or maybe you want to pick something that's popular, but maybe not too popular. Thankfully, in May 1938, the Masonic Service Association issued a booklet entitled Lodge Names of the 15,734 Lodges of the Forty-nine United States Grand Jurisdictions: An Analysis and Classification, Designed to Assist Lodges U.D. in Choosing Names.

The names of all 15,734 lodges in existence at the time of the survey were collected and analyzed by the Masonic Service Association. This analysis included breaking the names down into categories (Biblical and Masonic Names, Famous Names, Geographic Names, etc.), which were then further analyzed at the state and national level. Below are the tallies at the national level, which reveal that the most popular type of names for lodges were those named after the place in which they are/were located. Fully 43.4% of all Masonic lodges in the U.S. in 1938 were named after the place they were located.

[Number that follows indicates number of lodges in U.S. with that name in 1938]


Perhaps the part of the booklet that's the most fun is unusual names that show up for lodges. Here are some of my favorites:

It's likely that some of the lodge names in the Unusual Names category - including some mentioned above - may actually be place names. This is clearly the case with Drytown Lodge, No. 174, located in Drytown, California.

The last lodge mentioned above, Fourth Estate Lodge, was a Masonic lodge located in Boston, Massachusetts and comprised entirely of men in the newspaper business - the so-called "fourth estate."

As for the location of the lodge named after petroleum, maybe you're thinking "Houston!" Close, but no. It's Tulsa, Oklahoma, the earlier Oil Capital of the World that gave rise to Petroleum Lodge No. 474, chartered in 1917. In 1999 it appears to have merged with Millennium Lodge No. 543.