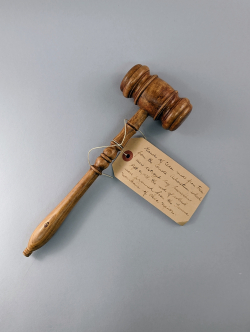 High in the Taurus Mountains of Turkey, there is a grove of Cedars of Lebanon (Cedrus libani). In the Grand Lodge of Massachusetts collection cared for at the Scottish Rite Masonic Museum & Library, there is a gavel made from the wood of one of these trees. The story of this gavel – from seeds to storage – brings together natural science and Masonic ingenuity.

In the early 1900s, Charles Sargent (1841-1927), the first Director of Harvard’s Arnold Arboretum, wanted to add examples of Cedrus libani to the collection of trees and shrubs at the site. However, these trees – which are mentioned in the Bible – grew primarily in the warmer climate of Lebanon and did not seem suited for New England weather. With the help of German naturalist Walter Siehe (1859-1928), Sargent was able to locate a forest of Cedars of Lebanon in the Taurus Mountains in Turkey. These trees grew further north and at higher altitudes and the two men thought they might also grow in Massachusetts.

In early 1902, Siehe shipped a number of cedar cones to Sargent and the trees were propagated in the greenhouses at the Arboretum. They started well and were planted on the grounds. By 1930, the Turkish Cedars of Lebanon were growing well and producing their own seed cones. The experiment was a success.

Then came the Hurricane of 1938, one of the most severe storms in New England history. The storm devastated the forests of the Northeast, destroying an estimated two billion trees in New York and New England. In the Arboretum, at least five of the Turkish cedars fell victim to the storm. (Happily, in 2022, eight of the original trees still survive on site.) As for the hurricane-damaged ones, a group of local Masons “grasped the opportunity to perpetuate these trees Masonically,” as one of them later said.

William Judd (1888-1946) was a member of Eliot Lodge in Dorchester and a gardener at Arnold Arboretum. During the clean-up after the hurricane, he and Welby McCollum (1887-1952) of West Roxbury Lodge decided to use some of the cedar wood to make a gavel. Given that McCollum worked as a builder, he may have crafted the piece.

After the gavel was completed, it was given to West Roxbury Lodge’s Past Master, Alexander McKechnie (1887-1965). He wrote out the story of the gavel on two typewritten pages – kept with the item – as a draft of his planned speech for a January 1940 presentation to West Roxbury Lodge. McKechnie mentioned in a handwritten addendum that he intended to present the gavel to the lodge and thence to the Grand Lodge of Massachusetts if desired. His note is addressed to Joseph Earl Perry (1884-1983), then-Grand Master of the Grand Lodge, and ends, “If you decide to put this gavel in the Museum you can pick out the important points in the above for a small card.” This small piece of material culture made of wood more than one-hundred-twenty years old still has a big story to tell.

Workshop: How to Do History with Online Mapping Tools - Register Now! 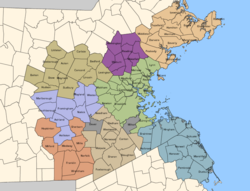 We are rounding out our 2014 lecture series, "Speaking of Maps: An Exploration of Cartography and History," with a free workshop.

How to Do History with Online Mapping Tools

In this workshop, participants will learn how to use online tools to create and consult maps that chart Metro Boston area history. Staff from the MetroBoston DataCommon, a provider of free applications that make it possible to map data, will collaborate with Joanne Riley, University Archivist at UMass Boston, to demonstrate how visualizations of data and space related to our region can help us understand our history. Whether you are interested in exploring demographics, economy, the physical environment, cultural history, politics or more, bring your curiosity and your questions. Our presenters will share examples and point the way to potential uses of digital mapping for your local history research. This workshop is free thanks to the generous sponsorship of the Ruby W. and LaVon P. Linn Foundation. Space is limited; registration is required. Contact: programs@monh.org.

This workshop is offered by representatives of two local resources for historical material and data visualization:

As University Archivist at the UMass Boston library, Joanne Riley coordinates extensive collections that complement those of the Massachusetts State Archives and the John F. Kennedy Library. The university's urban mission and strong support of community service is reflected in the department's collections of records of urban planning, social action, alternative movements, and community organizations. In that context, Joanne oversees the Mass. Memories Road Show project, a long-term project to collect and archive images and oral history related to Massachusetts communities. She is a member of the advisory board of Mapping Thoreau Country, a project that takes of advantage of digital technologies to use historical maps to organize and interpret images, documents, and information related to Henry David Thoreau's travels throughout the United States.

The MetroBoston DataCommon is an interactive data portal and online mapping tool that provides a wealth of information about the region’s people, communities and neighborhoods through a wide variety of topics -- from arts and education to the environment and transportation. It is a collaborative project of the Metropolitan Area Planning Council (MAPC) and the Boston Indicators Project. The MAPC is a regional planning agency serving the 101 cities and towns of Metropolitan Boston. The Agency promotes smart growth and regional collaboration, and provides a range of analytical, planning, and mapping services to municipalities and community-based organizations in metropolitan Boston. The Boston Indicators Project is coordinated by The Boston Foundation in partnership with the City of Boston and the Metropolitan Area Planning Council (MAPC). Its goals are to democratize access to data and information, to foster informed public discourse and to track progress on shared civic goals.