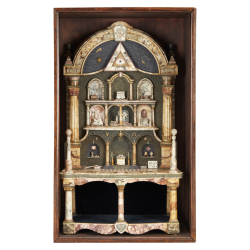 In the early 1870s, a Civil War veteran named George M. Silsbee (1840-1900) moved to Denver, Colorado. City directories from 1871, 1873, and 1876, listed his occupation as “artist,” though what kind of art he practiced is not known. When he was drafted to serve in the Union Army in 1863, a clerk noted that he was a daguerreian—an artist or photographer specializing in daguerreotypes. In 1875 he worked in partnership with Charles Anderson (1831-1922) as an organ builder.  Together they constructed a church organ with over 500 pipes—one of the first large organs built in Colorado. By 1880, Silsbee had moved to the boom town of Leadville, Colorado, likely prompted by the discovery of silver in the area. He lived there for the next twenty years, earning his living as a miner and as an engineer.

While in Leadville he embarked on a project later described by his family as “his life’s work.” The project included at least 14 large ink and watercolor paper charts backed with fabric and mounted on wood dowels. Densely packed with writing, calligraphy, and illustrations, these mystical charts explore ideas and symbols related to the Bible, Christianity, and Freemasonry. Along with these charts, Silsbee created this model (at left), newly added to the collection of the Scottish Rite Masonic Museum & Library.

About two feet tall, Silsbee’s three-dimensional model takes the form of a three level structure set onto a floor or counter, with an arch and columns spanning the whole.  Each level of the structure is rich with Masonic symbols portrayed as three dimensional objects shaped from different kinds of stone, metal, wood, plaster, and other materials. The first two levels feature symbols taken from the first three degrees of Freemasonry.  The upper level highlights symbols from the Royal Arch degree. Crowning the levels, Silsbee created a dark blue sky, glittering with sparkling grains (possibly pyrite) with an all-seeing eye at the center. Silsbee placed a keystone at the middle of the arch.  On it is the mnemonic associated with the Mark Master degree incised onto a circle.  What is likely Silsbee’s own mark—a square and compasses over a shield decorated with blue dots and red strips, representing the colors and symbols of the American flag—is at the center of the circle. At the very bottom of the model, on a blue shield, Silsbee cut his own initials in script, along with the year 1887, the date he likely completed this arresting work.

In crafting this model, Silsbee showed his skill at working with a wonderful variety of materials, and also demonstrated his knowledge of Freemasonry and its symbols.  The 1875 proceedings of the Grand Lodge of Wisconsin list Silsbee as a member of Kenosha Lodge, No. 47 in Kenosha, Wisconsin. He became a Mason at the lodge in 1863. When and where he became familiar with Royal Arch Masonry and where he took the Mark degree is not known.

A few months ago, the Scottish Rite Masonic Museum & Library added this striking example of Masonic folk art, which had been preserved in Silsbee’s family for several decades, to its collection. In the coming years, with additional research, we hope to learn more about George M. Silsbee--remembered by his family in an obituary as "an artist of ability"--and his remarkable creation.

Micheal D. Friesen, “’A Wonderful Promise of Something to be Attained’: Colorado Organbuilder Charles Anderson and his Work,” The Tracker, Journal of the Organ Historical Society, vol. 42, no. 1, 1998, 27-34, 46.

Many thanks to Erika Miller of the Grand Lodge of Wisconsin.