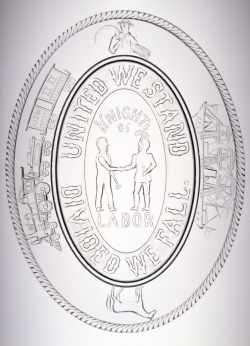 James Green Speaks On "The Experience of Work in the American Industrial Age," Saturday, November 14 at 2 pm. Free 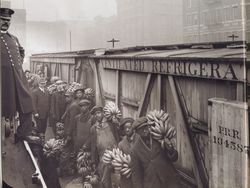 James Green writes, "How do you read this photograph of men working as stevedores on the waterfront many years ago, before longshore work was mechanized? What do you see in the men’s eyes, in their posture? Photos like this are the subject of my lecture on Nov. 14 at the . They yield no obvious answers, but they do offer us a window into the worlds of work Americans inhabited in years past—worlds that have, in a visual sense, vanished from our national landscape. Scenes like this have not, of course, disappeared from the world scene and are common in many places where the work of commerce and trade, buying and selling, and making a living is still hand work, “stoop labor.” Photos of lost worlds of work are, like artifacts from archeology digs, available for interpretation and more: for adding the visual component to telling what was once called “labor’s untold story.” Historians have now written whole new chapters of that story—tales of working lives such photo can bring to life. Combing knowledge that comes from print documents and recorded testimonies with these images can help us interpret the world of work as previous generations of Americans experienced it, and help us see that in some subtle ways that world has not changed as much as it might seem." 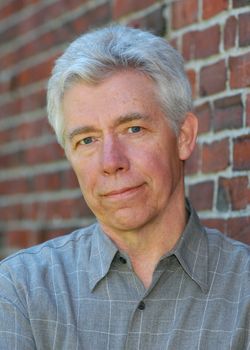 James Green, professor of history and labor studies at the University of Massachusetts Boston, speaks on "The Experience of Work in the American Industrial Age: What Images Call Us to See and Imagine," Saturday, November 14 at 2 pm. He is also a labor activist and the well-known author of Death in the Haymarket: A Story of Chicago, The First Labor Movement and the Bombing That

Divided Gilded Age America. The lecture complements “The Way We Worked: Photographs from the National Archives” now on view at the Museum. The lecture is free courtesy of the Lowell Institute.

Posted at 06:56 AM in Events, Labor history, Photography, The Way We Worked | Permalink | Comments (0) 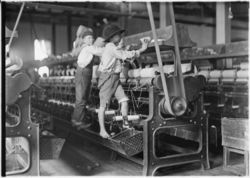 Work and the workplace have gone through enormous changes between the mid-19th century, when 60 percent of Americans made their living as farmers, and the late 20th century. “The Way We Worked,” a new traveling exhibition opening on June 6, features 86 photographs from the National Archives focusing on the history of work in America and documenting work clothing, locales, conditions, and conflicts. The exhibition is part of a 14-city national tour.

“The Way We Worked” is drawn from the National Archives, home to thousands of photographs of work and workplaces taken by government agencies for many reasons: to investigate factory safety, track construction progress, office training or to emphasize the continuing importance of humans in a technologically modern environment. The images featured in the exhibition, though possibly taken merely for purposes of record keeping, often reveal much more about how social forces such as immigration, gender, ethnicity, class, and technology have transformed the workforce.

The exhibition is divided into five sections: 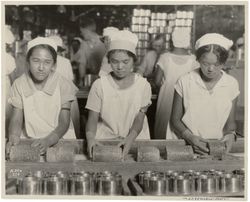 • “Where We Worked” explores the places Americans worked, from farms to factories, mines to  restaurants, as well as how race and gender often determined roles and status.

• “How We Worked” examines the effects of technology and automation on the workplace with images of people on assembly lines or using their tools of trade.

• “What We Wore to Work” looks at the way uniforms serve as badges of authority and status, and help make occupations immediately identifiable.

• “Conflict at Work” looks back at not just the inevitable clashes between workers and managers over working conditions, wages, and hours, but also how social conflicts, such as segregation, have influenced the workplace.

• “Dangerous or Unhealthy Work” features many of the photographs taken by social reformers hoping to ban child labor, reduce the length of the work day and expose unsanitary workplaces.

Spanning the years 1857-1987, the images in the exhibition cover the entire range of photographs on the topic in the National Archives holdings. The exhibition will also present a video showing a variety of workplaces.