Would You Jump? The Knights of Pythias Test of Steel

At the Scottish Rite Masonic Museum & Library, we collect objects, documents and books associated with any and all American fraternal groups - Masonic and non-Masonic. Recently, we were given this set of props that was used by the Knights of Pythias. While these two items may look identical in the photo - triangular wooden bases covered with pointed spikes - there is a crucial difference between them. On one, the spikes are metal and unyielding. On the other, the spikes just look like metal but they are actually rubber.

These props, known as the "test of steel," were a part of the ritual for the third Knights of Pythias rank - the rank of Knight. A published version of the ritual from 1928 explains how these objects were used. The candidate was asked to examine the one with the metal spikes. Then the officers would swap in the prop with the rubber spikes, without the candidate noticing. The Master at Arms would take the candidate to a set of steps and make sure he walked to the top. At the word of the man playing the King, the candidate had to jump into the center of the spikes. An earlier published version of the ritual, from 1882, differs slightly in that it does not call this part of the ritual the "test of steel," and suggests that these bases with spikes were not always used. In this version, the "instrument" is not specific - a blank is left in the text. The Master of Arms is commanded simply to go to the armory and "bring forth the first instrument of ---- upon which [his] hand may chance to fall." The rest of the ritual is conducted very similarly to that in the 1928 version - the candidate is led to the top of the steps and asked to jump after seeing the real item, which is then exchanged for the "fictitious" one (as it was called in the 1882 published ritual). 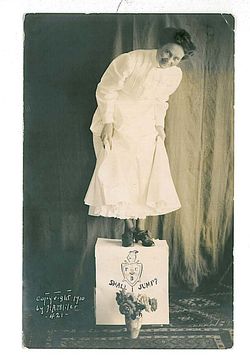 A postcard in the Scottish Rite Masonic Museum & Library collection shows a tongue-in-cheek allusion to the "test of steel." Seen here at right, it shows a woman on top of a block with a bouquet of flowers on the floor in front. Inscribed on the block is the Knights of Pythias symbol and the words "Shall I jump?" A member of the Knights of Pythias would understand the allusion being made by the postcard.

Do you have any props from American fraternal groups? Tell us about them in a comment below!

Ritual of the Knights of Pythias (Supreme Lodge, 1882).