Now on View: The Red, White and Blue 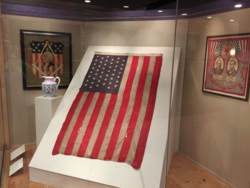 Here you can see a 46-star that belonged to Louis N. Willgens (1864-1940) who immigrated to America from France. He flew this flag at his home in Buffalo, New York.

The American flag is a powerful and easily recognized symbol, carrying a variety of meanings for many people. Congress first resolved that the American flag would be composed of thirteen red and white stripes and stars on a blue background in 1777. In following decades multiple laws specified colors, the number of stripes and stars on the flag and how these elements should be arranged, as well as rules surrounding the care and use of official flags. During the late 1700s and early 1800s, Americans primarily employed flags in military situations or to mark government property. Frequent visitors to the museum are familiar with the large 15-star flag created for this purpose on display in the Scottish Rite Masonic Museum & Library’s Farr Conference Center.

Everyday Americans started to display the flag and symbols related to it around the time of the War of 1812. During the Civil War, manufacturers and individuals seeking to express their patriotism or political point of view decorated everything from envelopes to quilts with interpretations of the United States flag.  Many fraternal groups, such as the Junior Order of United American Mechanics, have incorporated the flag into their symbols and objects that they used. The Mercer Pottery Company decorated the pitcher (shown below) with the square and compasses and an arm wielding a hammer, a shield and United States flags—all emblems of that group. This fraternal organization promoted jobs for native-born Americans, patriotism and public education. The design and decoration of many of the badges, banners and surviving objects made for the group incorporate United States flags or red, white and blue colors to reflect members’ interest in patriotism. 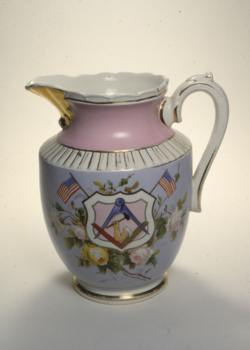 In one of the Museum’s hallway exhibition cases we have recently gathered together a group of objects from the collection that hint at the many ways the American flag has been used to help convey feelings and suggest values. This symbol has been employed by everyone from individual Americans to organizations as various as fraternal groups or manufacturers selling campaign souvenirs. Be sure to take a look the next time you visit the Museum! 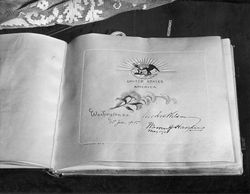