“Historical Plates” on view in “The Art of American History” 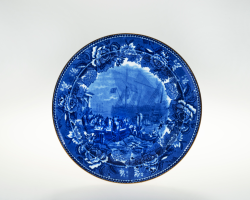 In 1899 a notice in The Boston Globe announced that a local glass and crockery store, Jones, McDuffee & Stratton Co., had received “Belated Importations” on a steamship called Ultonia.  The announcement went on to say that, “From Wedgwood we will have open on Tuesday new designs of the series of Historical plates….”  This dessert plate (at left), decorated in dark blue with a scene depicting the Boston Tea Party, was among the fresh offerings.  In 1899, when they added this plate to the roster, Jones, McDuffee & Stratton boasted they had 28 different subjects in their series of historical plates.  By 1907, their series included over 70 subjects. A Boston-based importer, Jones, McDuffee & Stratton, commissioned English ceramics manufacturers to make plates and other dishes decorated with historic scenes. Artists working for the importers created the artwork that Wedgwood and other British companies used to decorate items.  From 1899 to 1904 Jones, McDuffee & Stratton sold and directed retailers to sell plates like this one for 50¢ each. By 1907, the company sold these plates for 35¢ in their 10-story wholesale and retail facility on Franklin Street.

Unknown potters in Staffordshire, England, crafted this pitcher bearing portraits of American heroes such as Thomas Jefferson, John Adams, John Hancock, George Washington, Benjamin Franklin and Patrick Henry, along with the signatures of some of the fifty-six men who signed the Declaration of Independence. To the design in dark blue, manufacturers also added a variety of scenes from American history including Washington saying farewell to his officers, the signing of the Declaration of Independence, and Washington crossing the Delaware.  The largest images on the pitcher were places where important historic events had occurred, Independence Hall in Philadelphia and Faneuil (spelled Faneuiel on the pitcher) Hall in Boston, called put as the “Cradle of Liberty.”  Along the pitcher’s handle, the makers spelled out the words “American Independence 1776.”  The Rowland and Marsellus Company of New York imported this pitcher. They sold it, and a variety of other ceramic souvenir items, to retailers across the country. 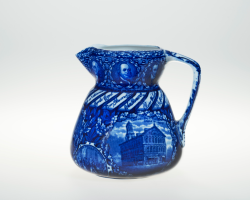 This plate and pitcher, as well as many prints and paintings of scenes from United States history are on view in “The Art of American History,” at the Scottish Rite Masonic Museum & Library through November 23, 2019.

Posted at 03:36 AM in Ceramics, Jones, McDuffee & Stratton, Posts by Hilary Anderson Stelling, “The Art of American History” | Permalink | Comments (0)