New to the Collection: Apron Owned by John Mix 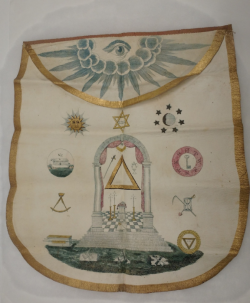 In the 1950s James Royal Case, later the Grand Historian of the Grand Lodge of Connecticut, noted, “We probably are indebted to this brother for preservation of records which Storer [Eliphalet Gilman Storer (1793-1870), long-time Grand Secretary] transcribed ‘almost entire’ and printed in the Connecticut Grand Lodge Proceedings….”  Case was praising John Mix (1755-1834)--the Grand Secretary of the Grand Lodge of Connecticut for almost thirty years, from 1791 to 1820.  Following his service at the Grand Lodge, Mix filled the same role at the Grand Chapter of Connecticut from 1821 until 1831.  Along the way he held offices in both Frederick Lodge No. 14 in Farmington and Pythagoras Chapter in Hartford.  He was also a probate judge and town clerk in his hometown, Farmington, from 1791 to 1823.  He stepped away from his work in Freemasonry in 1831, “on account of his advanced age, and almost total blindness, occasioned by cataracts on both of his eyes,” after “long and faithful services.”

A few months ago the Scottish Rite Masonic Museum & Library purchased a hand-colored engraved leather apron (pictured at left) with a family history of having been owned by John Mix.  The family had preserved it along with an 1818 receipt for furniture made out to Mix as part of his job as Grand Secretary.   To decorate the apron, a painter highlighted Masonic symbols, many of them used in the Royal Arch degrees, in watercolor (pictured at left) and added a gold border around the edges.  The apron has dull red silk trim along its top edge; at one time it likely had ties made out of the same material.  The museum owns a similar apron, as does the Grand Lodge of Massachusetts (pictured at right).  The apron in the GLMA collection has a history of having belonged to Ebenezer Way (1784-1849), a Freemason from New London, Connecticut.  He may have worn it at the cornerstone laying ceremony for the Bunker Hill Monument in 1825.

This apron design and at least two others are thought to be the work of engraver James T. Porter (active 1810-1830), of Middletown, Connecticut.  The attributions stem from a printed inscription on one of the apron designs: “J. T. Porter, Middletown, Conn.”  Another design has been attributed to Porter through its similarities to the inscribed example and a related inscription on the second design: “Designed and engraved by a brother, Midd. Conn.”  Unfortunately, James T. Porter’s name does not show up in the Grand Lodge of Connecticut’s membership records and little is known of his biography.  The apron thought to have been owned by John Mix and the related example collected by the Grand Lodge of Massachusetts, do not have printed inscriptions on them but have been attributed to James T. Porter based on similarities in design and histories of ownership in Connecticut.  Hopefully, further research will  uncover more information about James T. Porter and the aprons he engraved for the Masonic community in the early 1800s. 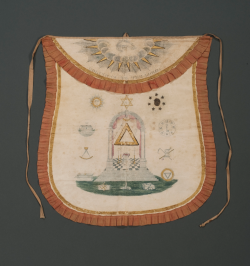 Many thanks to Gary Littlefield and Richard Memmott of the Grand Lodge of Connecticut.