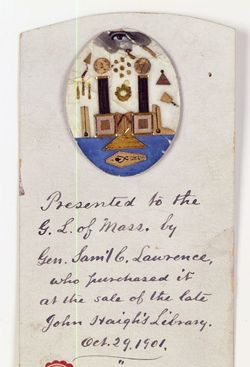 I have been fortunate to work with the Grand Lodge collection for almost three and a half years.  Among the more than 12,000 objects, I have many favorites; the pendant pictured here is near the top of my list.  Made in one century and sold at auction in another, this small item attests to the universality of Freemasonry’s tenets and reminds us of the importance of tradition.

The pendant is similar in form and materials to many that were made as an early form of “trench art” by French prisoners in England during the Napoleonic Wars.  Between 1793 and 1814, there were over 120,000 French soldiers and sailors in British prisons.  Using what was handy, including bone, straw from their mattresses, paper, their own hair, and other materials, the prisoners fashioned these small pictures.  Many sold or traded their work for food, clothing or bedding to improve their living conditions at the prison.  French Freemasons in the prisons were allowed to form lodges.  Pendants like this one may have helped those Masons to remember their teachings and might have been used in the prison lodges to teach new members or to identify lodge officers.  These items were undoubtedly appealing souvenirs for English Masons, who purchased or traded for them with the prisoners.

A century after it was initially made, this pendant was purchased at the 1901 auction of industrialist John Haigh’s (1832-1896) library by former Grand Master of Massachusetts Samuel Crocker Lawrence (1832-1911).  John Haigh was a native of England, but came to America in 1855.  Apprenticed as a calico printer, Haigh worked at the Pacific Mills in Lawrence, Massachusetts, and later became part owner of the Middlesex Bleachery and Dye Works.  Initiated into a local lodge in Lawrence in 1859, Haigh was an active Freemason who frequently served as an officer.

Samuel Crocker Lawrence was initiated into Hiram Lodge in West Cambridge (now Arlington), Massachusetts, in 1854.  A Civil War general, Lawrence became president of the Eastern Railroad Company in 1875 and served as the first mayor of the city of Medford, Massachusetts, from 1892 to 1894.  An active Freemason, Lawrence bequeathed his extensive Masonic library to the Grand Lodge of Massachusetts when he died in 1911.  Today, the Grand Lodge Library is named in his honor.

Masonic Pendant, 1793-1815, England, Collection of the Grand Lodge of Masons in Massachusetts at the National Heritage Museum, GL2004.3033.  Photograph by David Bohl.