10 Years of Blogging - and Masonic impostors! 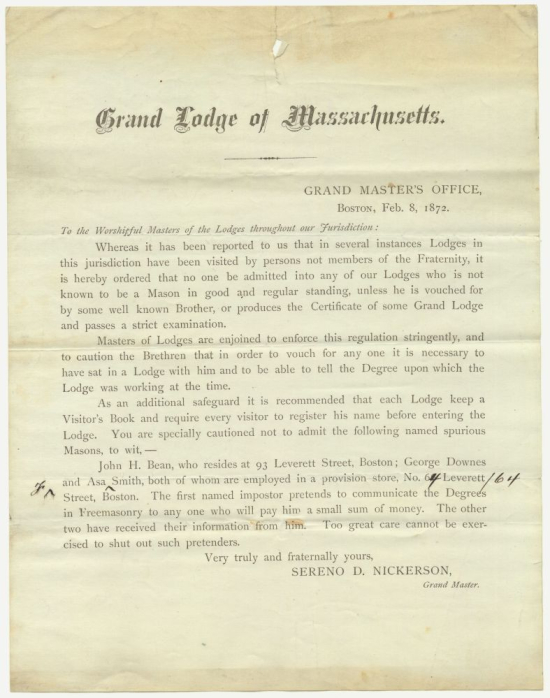 Today, we celebrate ten years of blogging! Returning to the subject of our very first blog post—Masonic impostors—we highlight a circular letter issued in February 1872 by the Grand Lodge of Massachusetts to all of the lodges under its jurisdiction. The circular letter warns lodges against admitting non-members into the lodge and and that care should be taken to enforce the Grand Lodge’s regulations for verifying whether visiting Masons are genuinely Masons and not impostors. Additionally, the circular warns lodges of three men in particular – John H. Bean, George Downes, and Asa Smith.

Many Masonic impostors, especially during this time period, pretended to be Freemasons in need of relief or charity and defrauded lodges by scamming them out of money. These three individuals, however, were doing something different. They were said to “communicate the Degrees in Freemasonry to any one who will pay him a small sum of money.” The word “communicate” has a special meaning in Freemasonry. To communicate a degree means to simply verbally describe the degree to the candidate as a form of initiation, as opposed to the more familiar form of initiation (known as conferring), in which the candidate participates in a ceremony conducted by lodge members.

The circular was reprinted in the April 1, 1872 issue of The Freemasons’ Monthly Magazine as part of an article entitled “A Caution Against Impostors,” in which the writer notes that John H. Bean began his Masonic impositions in New Hampshire, before coming down to Massachusetts. Two years later, Bean was still being reported in Masonic circles as an impostor. The February 1874 issue of The New England Freemason quoted the Grand Master of the Grand Lodge of Minnesota, who colorfully referred to Bean as "a pestilent fellow who ingloriously fled from Massachusetts," and went on to describe Bean as a person “who has figured so extensively in different parts of the United States humbugging the people by palming upon them a spurious Masonry.” The Grand Master also reported that a photograph of John H. Bean had been obtained and distributed in order to help stall his efforts to further defraud Masons.

As for what eventually happened to George Downes, Asa Smith, and John H. Bean, it is unclear. But the story of Masonic impostors trying to defraud Freemasons and of Masonic organizations trying to spread information about known impostors by distributing circulars and photographs is a familiar one. If you'd like to read more on the topic, be sure to check out all of our posts about Masonic impostors from the past ten years.