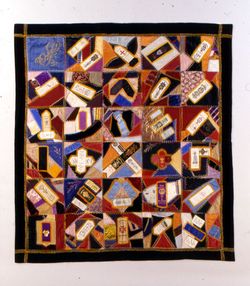 As an amateur scholar of historic textiles and museum intern, I was excited when asked to assist the Scottish Rite Masonic Museum’s Collections Manager with transferring rolled textiles to a new, customized storage rack. During the process I was introduced to crazy quilts. Their heavily stylized designs struck me as modern and innovative for their time period. Crazy quilts became popular in the United States during the last quarter of the nineteenth century (1875-1900). Bright colors and embroidered motifs sprawling across a dark ground are characteristics of their Japanese influence. This brief glimpse at the treasures stored away inspired me to take a closer look at the textiles in the Museum’s current exhibition, “Threads of Brotherhood: Masonic Quilts and Textiles,” which includes a crazy quilt.

I asked my friend and colleague, Kate Herron Gendreau, to join me in attending a gallery talk led by Dr. Aimee Newell, the Museum’s Director of Collections (see our previous post). By trade, Kate is a handcrafted artisan specializing in embroidery and hand sewing. We share an interest in the details of female domestic roles throughout American history. When I mentioned my fascination with the crazy quilts in the Museum’s collection, I learned that Kate recently inherited the unjoined blocks of her family’s crazy quilt. I was eager to hear her opinion on the quilt in the exhibition in hopes that she might be able to enlighten me with some uncelebrated details. We never could have imagined that on the day of the gallery talk, family members of J. Bruce Spilman, who donated the crazy quilt to the Museum (in memory of his relation, Charles Hadley Spilman of Illinois, for whom the quilt was made in 1886) would be present!

The size of this quilt tells us that it was a decorative piece - at 76 inches wide and 68 3/4 inches long it is not quite large enough to be used on a bed - likely used as a sofa throw blanket or piano cover. Crazy quilts often functioned as status symbols, demonstrating that their female makers had leisure time and wealth at their disposal. Textiles made in the homes of women belonging to the working class were often simple or purely functional since daily chores and household budgets limited women's time and resources.  Unfortunately, the Spilman family members present at the gallery talk could not add to the quilt’s history, but by sifting through the notes I scribbled down while Kate swooned over “heavy hand stitching” on velvet and silk, I could see the lost story of this quilt come to life.

As Kate began rhythmically rhapsodizing about “isolated daisy chain, turkey trot and fern stitch … or maybe this is a zigzag blanket stitch,” I began to feel as if I was sitting next to the woman who created this masterpiece. While Kate explained that variegated stitching with this many color changes is something that is rarely created or appreciated today, I could envision the quilt in progress spread across the embroiderer’s lap. I was delighted to learn that many of the blocks are composed of clothing scraps. Kate identified several men’s ties and shirts as well as women’s dress and blouse material in the quilt. From these scraps we can perhaps form an impression of the personal style maintained by the household in which the quilt was made. Often quilters of this era repurposed fabric from clothing that had been stained or torn and could no longer be worn. This decorative status symbol may exhibit more frugality than we initially assume. 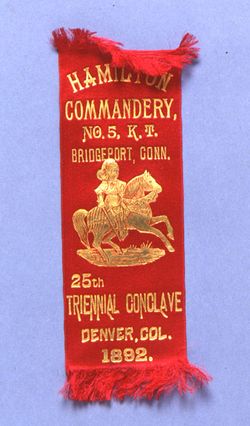 One feature that distinguishes this particular crazy quilt is the abundant fusion of conventional fabric and Masonic ribbons. Most of the ribbons in this quilt commemorate Knights Templar meetings in Chicago and San Francisco, dating from 1880 and 1883 (similar to the one at right from a Knights Templar meeting in 1892). Twenty-nine of the quilt’s thirty blocks include ribbons, some arranged in geometric shapes to mimic symbols used in Freemasonry. Most of the ribbons are outlined with an embroidered motif in yellowish-gold stitching that resembles the glory rays surrounding the Masonic symbol of the all-seeing eye, signifying watchfulness. As do many of the textiles in this exhibition, this crazy quilt presents a noteworthy example of the way Freemasonry has intersected popular culture throughout American history. 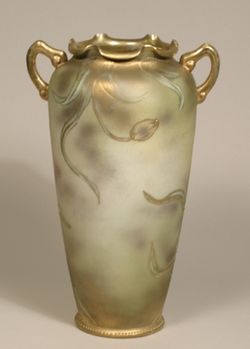 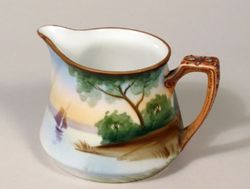