An unusual quilt made by Jane D. Haight Webster (1808-1877) during the mid-1800s shows how quilts functioned as educational tools for their makers, well beyond just teaching sewing skills.  Webster’s quilt, and others that incorporated fraternal symbols, provided a means for women to share their interpretation and knowledge of exclusive male groups like Freemasonry.  This quilt shows us that women did have familiarity with the symbols of a closed organization like Freemasonry.  It also offers a telling example of how women used quilts to push against the gender boundaries of their era.

Jane D. Haight was born on April 28, 1808 in Westchester County, New York, the daughter of John Haight (b. 1773) and Phebe Williamson (b. 1776).  Her parents were Quakers and she also joined the Society of Friends.  Her family moved to the Rochester, New York area in 1824.  On September 7, 1825 she married Harry Croswell Webster (1804-1885) in Pittsford, New York.  The pioneering couple moved to Indiana in 1835, near South Bend, in the northern part of the state.  Together, they had thirteen children, five sons and eight daughters.

Around 1850, undoubtedly in response to the Spiritualism movement that started in the Rochester, New York area, Jane became a convert to spiritualism, eventually becoming a “writing medium.”  Spiritualism was a religious movement aimed at proving the immortality of the soul by establishing communication with the spirits of the dead.  Scholars have suggested that Spiritualism’s popularity was a response to the widespread economic, social and cultural changes taking place in America in the mid-1800s.  It offered a sense of order for believers, at a time when their daily lives were increasingly fragmented.

At some point in the 1850s or 1860s, Jane Webster made this quilt.  The quilt is pieced and appliquéd by hand, using plain weave cotton fabrics.  The quilting is extremely well done; quilters out there will admire Webster’s thirteen stitches to the inch!  Quilting designs vary across the top with motifs including cables, feathers, florals, parallel lines and outline stitching.  The single border is an appliquéd floral vine.  The quilt is finished with a thin cotton batting and straight-applied binding.  It is in very good condition and shows few signs of regular use.

The design of Webster's quilt is linked with her ability as a medium.  Spiritualists considered the trance to be an elevated state that provided access to spirits and to knowledge of the world beyond that was inaccessible to conscious human beings.  According to family history, Jane designed her quilt by going into a trance; she would see an arrangement of symbols, and then stitch that arrangement into her quilt.  Indeed, the quilt is put together with appliqué and embroidery added to the blocks after they were joined, supporting the family story of the quilt’s construction. 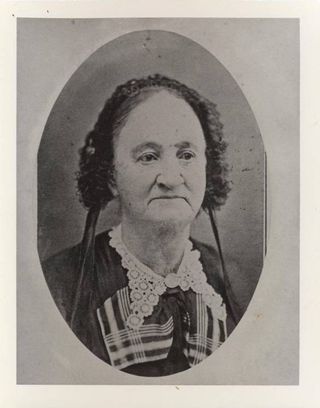 While family history holds that the quilt was a creation aided by Webster’s Spiritualist leanings, visual examination suggests that she may also have been influenced by the various depictions of Masonic symbols that she saw around her.  Jane’s husband, Harry Croswell Webster, was a Mason and belonged to St. Joseph Lodge No. 45 in South Bend.

The central image on her quilt shows an archway supported by two columns or pillars with a checkered floor and a series of steps at the bottom.  The pillars are known as “Jachin and Boaz” after the Biblical reference to Solomon’s Temple.  Symbolically, they represent strength and stability.  The checkered floor (or mosaic pavement) is usually seen rendered in black and white; it represents good and evil in life.  Under the archway (which represents the “arch of heaven”), the symbols include: the all-seeing eye, a symbol of watchfulness; the letter “G,” signifying geometry or God; a square and compasses, symbolizing reason and faith; and an altar, signaling a place of refuge.  Along the bottom are a coffin and a scythe, symbolizing death.  And, on the sides, there are more easily identified symbols: the 47th problem of Euclid that teaches Masons to be lovers of the arts and sciences; Jacob’s ladder with three rungs, signifying either the three theological virtues of faith, hope and charity, or the three stages of life (youth, manhood and age); and an anchor signifying hope.  Numerous other symbols are also appliquéd, although some remain a mystery as to what they are and what they symbolize.

After a brief illness, with “congestion of the lungs,” Jane D. Haight Webster died on March 26, 1877.  Her husband, Harry Webster, died on January 23, 1885.  Both are buried in Bowman Cemetery in South Bend.  When Jane Webster died, Spiritualism had started to wane; it lost strength during the 1870s and 1880s as smaller groups splintered off and as many mediums were exposed as frauds.  In the end, Jane Webster’s arrangement of symbols on her quilt seems to have been influenced by more earthly sources, in addition to her spirit communications.  Her quilt brings together an illuminating combination of personal knowledge and cultural experiences, helping us to learn from it, just as it taught her.  The quilt was treasured in Jane’s family and was passed down until it was presented to the National Heritage Museum in Lexington, Massachusetts in 1986.

To see a selection of quilts in the Museum’s collection visit the Treasures section of our website.