A 1794 Masonic Medal from New London 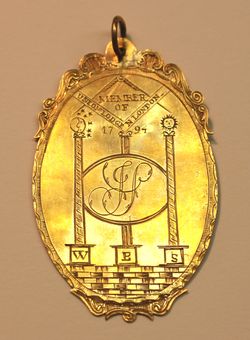 In 1794 Freemasons in New London, Connecticut, had much to celebrate.  After several years of inactivity, Union Lodge (now Union Lodge #31) received a dispensation from the newly organized Grand Lodge of Connecticut.  As a sign of enthusiasm, one lodge member had this attractive gold medal manufactured and engraved.

Around the time this medal was crafted, Masons on both sides of the Atlantic commissioned personal badges or medals made out of precious metals to wear to lodge meetings and at processions.  Unlike jewels of office that were owned by a lodge, these badges belonged to individual Masons.  Men wore them as a sign of their connection with Freemasonry, its ideals and place in the community.  Engraved with Masonic symbols and often the owner’s name and initiation date, these badges linked, in an enduring way, Masons with the organization they valued.

Many of these badges, sometimes called chapter medals, although engraved by different craftsmen and owned by men in different parts of the country, share similarities in shape, size and iconography.  Decorated on both sides, this small oval medal—about 1 ½ inches long—bears a Latin motto, multiple Masonic symbols, the owner’s initials, J. S. (or possibly J. P.), and the year, 1794, with the words, “Member of Union Lodge N. London.”  This medal also features Masonic symbols such as an open bible, square and compasses, various working tools, an all-seeing eye, a dove and ark, pillars, suns, moons, stars, and a coffin; symbols associated with Freemasonry’s first three degrees.  On the medal the engraver also illustrated symbols related to Royal Arch Freemasonry.

New England chapter medals emerged from an English practice.  As early as 1776 the frontispiece of a 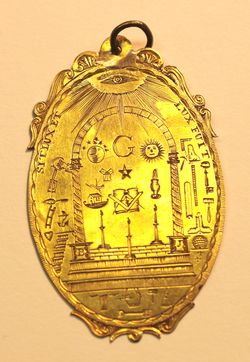 London-printed Masonic expose, Jachin & Boaz, or An Authentic Key to the Door of Free Masonry, showed an engraved medal featuring many of the same symbols as seen on this and other chapter medals.  Text within the publication also described the badges noting that:  “These medals are usually of silver…on the reverse of these medals…some even add to the emblems other fancy things that bear some analogy to Masonry.”  American engravers might have used illustrations in Jachin & Boaz or other publications as models for their depiction of Masonic symbols.  As well, American publishers issued versions of Jachin & Boaz that opened with the same frontispiece as the British editions.  Additionally, small emblems similar to this one were easily carried when their owners traveled.  One craftsman might copy or seek inspiration from another engraver’s work; be it a medal, jewel, a certificate or Masonic apron.  Residents of New London, a seaport, likely had the chance to socialize and do business with Masons from other parts of the country and the world.

So far, research has not confirmed who fired owned this medal, but Joseph Skinner, a member of Union Lodge who joined on December 23, 1794, is a good candidate.  Although small, this carefully engraved medal, because it was made of gold, a scarce and costly material, was not ordered or worn casually.  Whoever commissioned and wore this medal took pride in his association with Freemasonry.

Many thanks to John Birdsall of Union Lodge #31.

Sharing Comments on The Initiated Eye 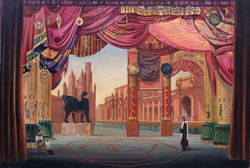 Here at the National Heritage Museum, we always include a way for visitors to leave their comments after viewing our exhibitions.  Since our show, The Initiated Eye: Secrets, Symbols, Freemasonry and the Architecture of Washington, D.C., opened almost six months ago, we have received a variety of feedback in the comment book at the end of the exhibit.

The book offers visitors a chance to make any kind of comment they wish.  Sometimes they include their names and where they are from.  While most list an American town or state, we were excited to see some foreign visitors – including those from England, Scotland, Switzerland, and even India!

We are interested in all kinds of comments, whether positive or negative.  For example, one visitor helped us catch a typographical error by pointing out that the birth year for the artist was incorrect on one of the painting labels – it read “b. 1855” instead of “b. 1955”!  We appreciate this attention to detail and have fixed the errant label.

Still other visitors shared their favorite object in the show.  Nora Jane wrote “I especially loved the statue of George [Washington].”  Anja and Ashley, who signed the same page in the book, both liked the 38-star flag (don’t miss an upcoming June blog about this fascinating artifact).  And, Mike H. noted that he liked “the parade at the Capitol photo.”

Some visitors leave their questions in the comment book.  Thirteen-year-old Christina from New Hampshire wrote “I noticed in the painting to the left [Building the Temple Within, shown here at top] that the 2 columns were in the order of JB but here it is BJ [a pair of actual Masonic columns from the collection, shown at right].”  Undoubtedly, Christina has not been the only one to notice this discrepancy.  In fact, the exhibition includes two paintings – by the same artist – that contradict the order of the columns.  In the painting, An Auspicious Day, which depicts George Washington (shown below at left), the stair posts are labeled like columns and read “BJ.”  So, why the discrepancy? 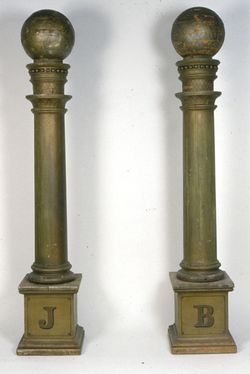 In Freemasonry, the columns marked B and J represent Boaz and Jachin, the columns that were erected at the entrance to King Solomon’s Temple.  They are described in the Bible, in 2 Chronicles 3:15-17, “And he reared up the pillars before the temple…and called the name of that on the right hand Jachin, and the name of that on the left Boaz.”  From this description, the B column should stand on the left, while the J column should be on the right.  This description is used in Masonic ritual, which is based on the story of the building of Solomon’s Temple.

So, why do the columns appear in the opposite position in the painting Building the Temple Within – and, indeed, in a number of printed and published sources?  It may be that the artist was following the way the names of the columns are listed in the Bible – with Jachin coming before Boaz.  Or, it may relate to the fact that text is reversed when converted from Hebrew, which is read right to left, to English, which is read left to right.  When we set up our columns in the exhibition, we chose to follow the biblical description – and the Masonic ritual.  Unfortunately, we do not know why the artist of the paintings placed the columns in one order in one painting and in the opposite order in another. 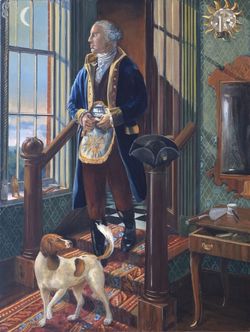 We appreciate all of the feedback we receive on our exhibitions.  It’s gratifying to know that this exhibition provided “new insights into our US history,” as one visitor wrote.  Or, as another commented, “New view of how history was made!”  So, let us know how you think we’re doing – on site or online.  We can’t wait to hear from you.

The Initiated Eye will be on view through January 9, 2011.  The paintings in the exhibition are the work of Peter Waddell, and were commissioned by, and are the property of, the Grand Lodge of Free and Accepted Masons of Washington, D.C., with all rights reserved.  This exhibition is supported by the Scottish Rite Masons of the Northern Masonic Jurisdiction, U.S.A.