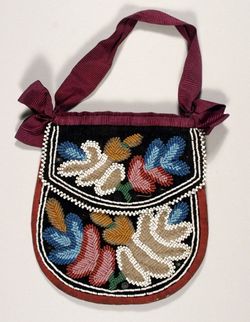 I love the aesthetic shown by beaded purses like this one, which were made during the late 1800s and early 1900s by members of Native American tribes in upstate New York. The two-tone beading, the rich velvet and silk fabrics and the floral designs make these artifacts recognizable at one glance. So, when selecting objects from the National Heritage Museum collection for our current exhibition, Curators’ Choice: Favorites from the Collection, I just had to pick one of the Native American-made purses from our collection.

Capitalizing on the Victorian love of decoration, Iroquois women beaded purses, wallets, pincushions and numerous other kinds of “whimsies” to sell to tourists at Niagara Falls and other popular vacation spots. Making and selling souvenir beadwork was a means of cultural as well as economic survival. The beadworkers created a successful mixture of aboriginal style and Victorian excess, allowing them to make a living in an manner deemed “acceptable” by white society, while also manipulating the market to not only accept, but prize, their aesthetic, which retained a sense of ancient beliefs and an independent spirit.

Paper patterns were frequently employed as guides to create the beaded motifs. The beadworker would anchor the pattern to the fabric and apply strings of beads across the surface, filling in the space. Some purses include a beaded fringe around the edge. This was a recognizable “Indian” characteristic for consumers, bringing to mind “traditional” Indian costumes made from animal hide and fringed at the ends.