International Order of Twelve of Knights and Daughters of Tabor 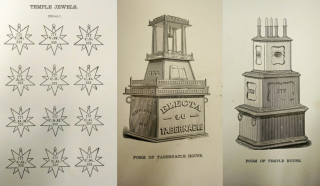 Moses Dickson and the Order of Twelve 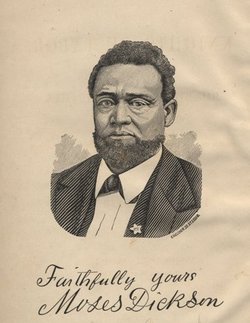 Pictured here is Moses Dickson, from the frontispiece illustration of the 1879 book A Manual of the Knights of Tabor and Daughters of the Tabernacle. In 1872, the Rev. Moses Dickson founded the International Order of Twelve of Knights and Daughters of Tabor, an African-American fraternal order focused on benevolence and financial programs. Dickson was born a free man in Cincinnati in 1824, was a Union soldier during the Civil War, and afterwards became a prominent clergyman in the African Methodist Episcopal Church. Dickson showed an interest in progressive fraternal organizations early on - in 1846 Dickson, with others, founded a society known as the Knights of Liberty, whose objective was to overthrow slavery; the group did not get beyond the organizing stages. Dickson was also involved in Freemasonry - he was the second Grand Master of the Prince Hall Grand Lodge of Missouri.

Dickson's International Order of Twelve of Knights and Daughters of Tabor - or Order of Twelve, as it's more commonly know - accepted men and women on equal terms. Men and women met together in higher level groups and in the governance of the organization, although at the local level they met separately - the men in "temples" and the women in "tabernacles" (akin to "lodges" in Freemasonry). The Order of Twelve was most prominent in the South and the lower Midwest. The major benefits to members - similar to many fraternal orders of the time - was a burial policy and weekly cash payments for the sick.

Want to learn more about the Order of Twelve? Here are a few primary and secondary sources that we have here in our collection (with primary sources listed first):

Dickson, Moses. A Manual of the Knights of Tabor and Daughters of the Tabernacle, including the Ceremonies of the Order, Constitutions, Installations, Dedications, and Funerals, with Forms, and the Taborian Drill and Tactics. St. Louis, Mo. : G. I. Jones [printer], 1879.
Call number: RARE HS 2259 .T3 D5 1879