Institute of Museum and Library Services 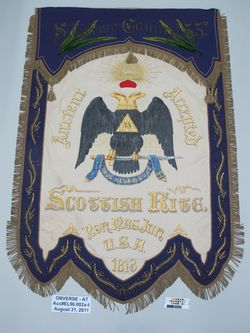 Last spring, the Scottish Rite Masonic Museum & Library received an American Heritage Preservation grant of almost $3,000 from the Institute of Museum and Library Services (IMLS) to support conservation treatment and archival storage housing for three fraternal banners in the collection. The Museum was one of only four institutions in Massachusetts to receive an award.

The IMLS grant is particularly important to the Museum & Library because of the nature of its Masonic and fraternal collections. Many of the objects in the Museum’s collection are not widely collected by other history museums, so the staff often has to devise creative solutions to store the objects and to protect them through conservation. Pursuing best practices for our collection and working to conserve and preserve delicate materials are highly prioritized stated goals in our Collections Plan.

By 1900, over 250 fraternal groups existed in the United States, numbering six million members. Banners were an important component of American fraternal activities. These colorful textiles were used inside lodges and also in public parades and at cornerstone layings and other ceremonies. Photographs and prints from the Museum’s collection show us just how widespread the use of these banners was. An image clipped from a newspaper or magazine around 1868 shows a group of Odd Fellows taking part in a public parade (see below). Their banner is clearly shown in the picture near the center of the group. Many fraternal groups made sure to include their banner when they took formal portraits. For example, a Modern Woodmen of America Axe Drill Team from Kentucky prominently showed off their banner in an early 1900s photograph (see below). 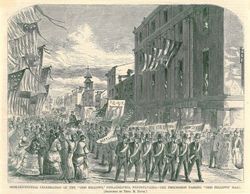 The banners that were treated are all double-sided, allowing their respective groups to advertise themselves to audiences in front of and behind them during parades and processions. Two of the banners covered by the grant are from the Scottish Rite, Northern Masonic Jurisdiction, U.S.A., the Museum’s parent organization. The third banner was originally used by the fraternal group known as the Journeymen Stonecutters Association. The oldest active union in the United States, the group formally organized in 1853. Members were (and are) working stone cutters and carvers. This particular banner was used by the branch in Wilkes-Barre, Pennsylvania. It was locally made by the William H. Horstmann Company in Philadelphia, a company that made regalia and props for many American fraternal groups during the late 1800s and early 1900s. 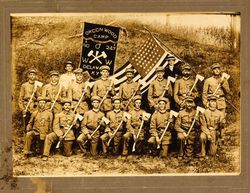 One of the Scottish Rite banners received much-needed conservation treatment (above left). It showed signs of age, as well as damage from long-term exposure to the environment and stress from gravity. The surface was rippled throughout and the painted sections were worn, with some loss. The banner showed structural damage and staining. The treatment, performed by Windsor Conservation of Dover, Massachusetts, provided conservation cleaning and stabilization of the most critical structural damage. The banner has been surface cleaned, with special attention paid to mitigating the stained areas. Detached fringe trimming on the edges and the detached valance at the top were re-attached. The banner’s decorative tassels were also repaired and stabilized. 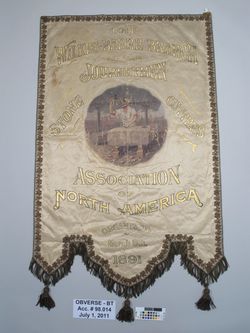 The second Scottish Rite banner and the Journeymen Stonecutters banner (at left) - both of which show significant areas of split silk that could only be treated at great cost – have been rehoused in specially-fabricated archival boxes. This archival storage treatment provides a preventive measure for the banners, which were previously stored uncovered on large, heavy pieces of plastic. The banners are now tacked to a padded fabric-covered board that can be used safely for occasional display and for handling. The new storage boxes protect the banners from light damage and the added resting boards prevent the need to move the banners from one flat surface to another, cutting down on the risk of further damage.

We are currently working on plans to exhibit at least one of the banners this coming summer, so please check our website for upcoming details!