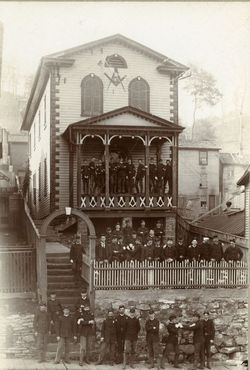 Ever since I first came across this photograph in the Scottish Rite Masonic Museum & Library’s collection, I’ve had a soft spot for it. I especially love the railing with its square and compasses decoration!

This particular view shows a Masonic building with a group of men wearing uniforms in front and on the porch. A handwritten note on the back suggests that the building is located in Petersburg, Virginia, and previously museum staff noted that the soldiers were serving in the Civil War. So, when I added it to the checklist for our “Inspired by Fashion” exhibition (which closed on March 24, 2012), I thought I would do some research to see if I could confirm the building’s location – and ascertain whether it is still standing.

Unfortunately, I wasn’t able to complete my research prior to the opening of the exhibition, but recently, with the help of staff from the Virginia Department of Historic Resources, I discovered that the building is actually located in Pocahontas, Virginia, and it is still standing (see image at right). Unfortunately, the railing with those wonderful square and compasses symbols has been removed, but many of the building’s other features are still in place. The Petersburg attribution seems to stem from the fact that an area along the Appomattox River – and adjacent to Petersburg – was known as Pocahontas and was added to Petersburg in 1785. 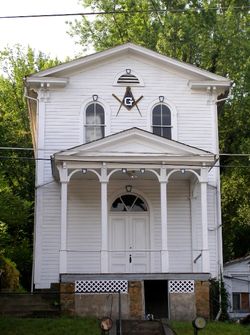 Pocahontas, Virginia, where this Masonic lodge stands (and Pocahontas Lodge No. 240 still meets there) is located in Tazewell County, in far western Virginia, on the West Virginia border. Once coal was discovered in the area, development followed: the town was named in 1881 and the railroad reached Pocahontas in 1883. Pocahontas Lodge No. 240 received a dispensation from the Grand Lodge of Virginia in 1883. The building was dedicated on November 24, 1886.  So, not only was our information about where the building stood wrong, but the idea that these are Civil War soldiers is also incorrect; given the date that Pocahontas was settled, this photograph must have been taken long after the Civil War was over.

So, while I have solved the mystery of this building’s location, questions remain: when was this photograph taken? Who are these men? What kind of uniforms are they wearing? If you have any ideas, please let us know in a comment below! And, you can look at more photos from our collection via our website, just click here. 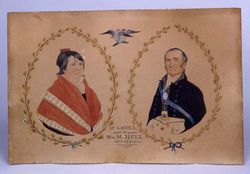 Don’t miss your chance to see “Inspired by Fashion: American Masonic Regalia” at the National Heritage Museum! The exhibition closes March 24, 2012 (visit our website for hours and directions). Here are a few objects from the exhibition to whet your interest.

Freemason J. Hull sat for this portrait in the early 1800s wearing his Masonic apron, sash and medal. Hull’s apron resembles the one designed by Abner Reed of Connecticut, which you can see below (and check out our previous post about Reed). It is difficult to make out the details on Hull’s medal, but it may be a mark medal. In the Mark Master degree, members chose an individual symbol to represent themselves. The mark medal shown here was made for H. Gardiner around 1800. He chose a crossed keys symbol for his mark, which also represents the treasurer’s office in the lodge. 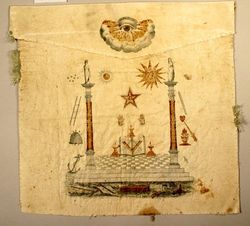 During the early 1700s, Freemasonry offered a way for upper-class men to socialize and share views. Soon after, the fraternity experienced a tremendous upsurge in popularity among many classes of men, in part because its values of parity and brotherhood resonated with supporters of American independence. Lodge clothing also mirrored these Masonic principles of equality and brotherhood. 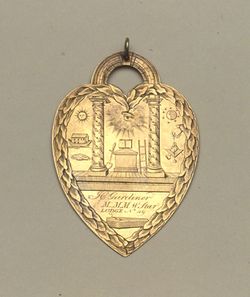 From the 1700s on, Masons had a public presence, wearing their regalia and participating in parades on special occasions. In this way, men associated themselves with Freemasonry, while also creating an identity for the lodge itself. In part, members communicated this message by moving within contemporary fashion conventions. Specific items of clothing made from special materials conveyed the fraternity’s values as well as identifying the wearers of men striving for character and class.

If you are interested in learning more about the intersection of men's fashion and Masonic regalia, we hope you will come see "Inspired by Fashion"! 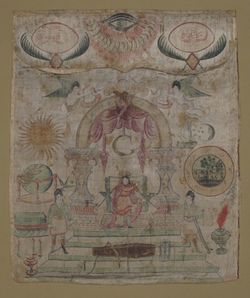 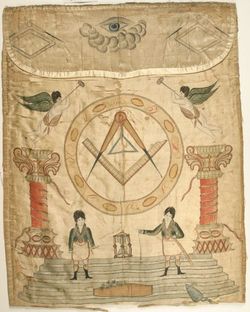 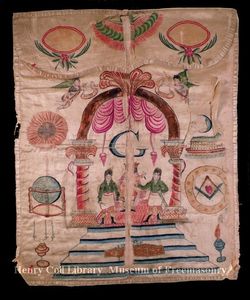 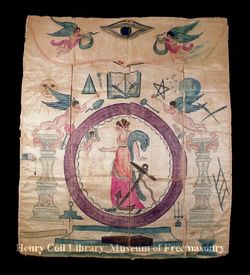 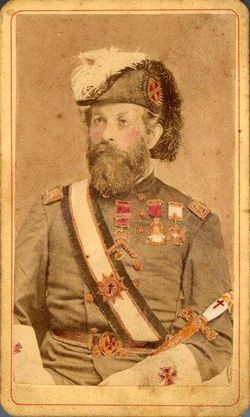