Lecture: What Map Was Used by the British Officer Who Led the Retreat from Lexington and Concord? 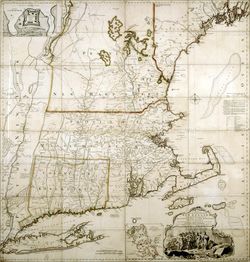 It's spring of 1775, and the Province of Massachusetts Bay is rebelliously defying the laws Parliament has passed to coerce the local Assembly to obey His Majesty, King George III. Instead of offering reimbusement for the tea destroyed in Boston Harbor back in late 1773, the country people outside of Boston have formed an illegal assembly which is turning the once-loyal town militias into an army of insurrection! What is a Regular Army officer to do? Imagine yourself in the position of Brigadier General Percy, commander of the 5th Regiment of Foot, stationed in Boston in 1774 to keep the King's peace. How can you make a strategic, tactical or even logistical assessment of the surrounding landscape? Are there maps available that provide the level of detailed information about the countryside required by your duties?

Join Matthew Edney, Osher Professor in the History of Cartography at the University of Southern Maine, as he explores these fascinating questions in a free lecture at the Scottish Rite Masonic Museum and Library. On Saturday, March 15 at 2 pm, his topic will be: General Hugh, Earl Percy's Use of the Map of New England During the American Revolution. Edney delves into the evidence provided by the revealing annotations made on a personal copy of this map by Hugh, Earl Percy, a distinguished career officer in the British Army and commander of its 5th Regiment of Foot. (Our image is of the Museum & Library's print of this map; the print annotated by Percy is held by the Osher Map Library at the University of Southern Maine.) Percy led the relief column that saved the retreating British forces at the Battle of Lexington and Concord on April 19, 1775. This presentation will be a particular treat, as our museum is located just yards down the road from Lexington's Munroe Tavern, where Percy set up a temporary field headquarters on April 19th. A variety of other maps available in the period outline the distinct kinds of geographical knowledge possessed by the British military in Boston in 1774-1775 and will be also be examined in the lecture. This program is free to the public once again thanks to the generous sponsorship of the Ruby W. and LaVon P. Linn Foundation. 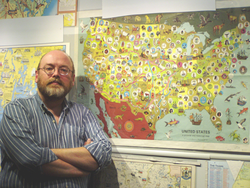 Matthew Edney studied for a B.Sc. in geography at University College London before moving to the U.S.A. for graduate work in geography, cartography, and the history of cartography at the University of Wisconsin-Madison. He taught at the State University of New York at Binghamton for five years before moving to USM in 1995, at which time he declared himself a willing refugee from GIS and digital mapping. USM has allowed him to focus on his specific interests in map history, which have steadily expanded from the history of surveying technologies and their role in nineteenth-century European state formation and imperialism to encompass the wider practices and performances of map making in Europe after 1600, and more particularly in the British Atlantic World, 1650-1800.

On the same Saturday, March 15, we've planned a 12 noon gallery tour of "Journeys and Discoveries: The Stories Maps Tell" in anticipation of Matthew Edney’s lecture at 2 PM. Polly Kienle, Public Programs Coordinator, will focus the tour on some of the Revolutionary War-era maps from the Museum’s collection. While London mapmakers published views of the American colonies and towns where British soldiers and colonists fought for territory, other maps of North America reflected power struggles between European nations as well as Native American nations’ lessening influence on the continent. Click here to read a related past post from our blog.

Melinda Kashuba of Shasta College will join us on Saturday, April 12, at 2 p.m. for the series' second talk. Her topic will be: Organizing Wonder: Using Maps in Family History Research. After the lecture, the presenter will offer an informal discussion with interested audience members.

For our final spring map lecture, we will welcome David Bosse, Librarian and Curator of Maps, Historic Deerfield, to the Museum & Library on Saturday, June 7. His 2 p.m. presentation will be on: Map and Chart Publishing in Boston in the 18th Century.