A Freemason Strives for Reconciliation as a Supreme Council Splinters

While much attention has been given to Edward A. Raymond, Killian H. Van Rensselaer, and their roles in the Schism of 1860, this document from the collection of the Scottish Rite Masonic Museum & Library brings attention to a lesser-known figure: William Blackstone Hubbard, 33°, a Freemason from Ohio, who had served as the Grand Master of Ohio and for a year (May 1861 to May 1862) as the Sovereign Grand Commander Elect of the Northern Masonic Jurisdiction.

for both Supreme Councils agree that William Blackstone Hubbard was one of the few, if not the only, men pushing for reconciliation. As Lieutenant Sovereign Grand Commander Van Rensselaer stated in his 1862 Annual Address,

Hubbard’s sole intention was to broker peace between his Brothers, and only after his efforts during 1861’s Annual Session were exhausted did Hubbard leave before its closure. As Raymond reported to his Sovereign Grand Consistory on May 22, “On leaving, he [Hubbard] addressed a note to me regretting his disappointment, and declaring that he did not expect ever again to meet any of his brethren in Supreme Council on earth…” (1861 Raymond Proceedings, p. 31)

On the day after Hubbard had left Annual Session, on May 20, 1861, the five members of the Van Rensselaer Supreme Council who were present unanimously voted to depose Sovereign Grand Commander Edward A. Raymond, and elected William B. Hubbard in his place. “The reason for their doing this is plain,” Raymond stated. 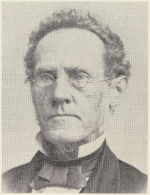 William Blackstone Hubbard would never serve as Sovereign Grand Commander. During the following year’s Annual Session, Hubbard offered “his well wishes to the Supreme Council” but declined “any official honors.” In the years following, Hubbard distanced himself from the Supreme Council, which in the 1865 Proceedings declared his seat as an Active Member vacant, citing his ill health.

William Blackstone Hubbard, 33°, died the following year on January 5, 1866. He never lived to see the unification of the two previously competing Supreme Councils in 1867.