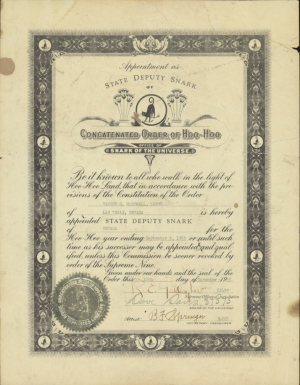 On November 16, 1955, the Concatenated Order of the Hoo Hoo's Office of the Snark of the Universe issued this State Deputy Snark appointment certificate to Vaughn H. McDowell (1913-1977), a resident of Las Vegas, Nevada. This is one of many fraternal certificates in the Scottish Rite Masonic Museum & Library's collection.

Established in Gurdon, Arkansas, on January 21, 1892, by six men with various connections to the lumber industry, the Concatenated Order of the Hoo Hoo is still around today. Now known as Hoo-Hoo International, the group's mission is to "achieve a united and progressive forest products industry through fraternal participation in its business, social and community programs so that there may result, Health, Happiness and Long Life to its members." The group is open to people eighteen years and older, "who are engaged in the forestry product industry or any person genuinely interested in supporting the purpose and aims of our order." The group's name may be unusual-sounding - maybe even silly - but they are a business-minded group that bills itself as the "Fraternal Order of the Forest Products Industry."

Hoo Hoo? Snark? Deputy Snark? Fraternal officer's titles can be grand, and sometimes even strange, but Snark of the Universe is perhaps in a category of its own. Where did these names come from?

According to the group's own history [PDF], two of the founders, William E. Barnes and Bolling Arthur Johnson, were responsible for the group's nonsensical names, many of which were directly inspired by a poem written by Lewis Carroll, who is perhaps best remembered as the author of Alice’s Adventures in Wonderland. The Hoo-Hoo's own history reports that

W. E. Barns had just completed reading Lewis Carroll's "Hunting of the Snark" and suggested that the directors be given names of an "eerie and peculiar" nature like those used in the book. Hence, the names "snark", "bojum", "Sr. High Hoo-Hoo", "Jr. High Hoo-Hoo", and "bandersnatch" were chosen, although "jabberwock" later replaced "bandersnatch". The other names which are now affixed to officers (e.g. Scrivenoter, Arcanoper, Custocatian, and Gurdon) were the products of Johnson's imagination some days or weeks later.

In addition to "eerie and peculiar" titles, the group's logo is a black cat with its tail curved into the shape of a number 9, which can be seen on McDowell's certificate. The organization explains the choice of a black cat as its mascot in its own history:

Being a war upon conventionality, Hoo-Hoo was to be non-superstitious from the beginning. Therefore, when the discussion lent itself to adopting a mascot it seemed the black cat would be the critter extraordinaire due to its general association with bad luck. Also, having no history of its own, Hoo-Hoo would assume some other history, decidedly that of ancient Egyptians who worshipped the black cat as a deity. (Other Egyptian religious symbols and lore found its way into Hoo-Hoo in later years through the Osirian Cloister, an "upper chamber" of Hoo-Hoo consisting of the order's most dedicated workers.) In honor of the legendary nine lives of the cat, Johnson suggested that the number nine assume a high and lofty position within the makeup of Hoo-Hoo. There would be nine men on the Board of Directors. The order would hold its annual meeting on the ninth day of the ninth month beginning at nine minutes after nine. Annual dues would be 99 cents, and the initiation fee would be $9.99. The membership would never consist of more than 9,999 men.

Vaughn McDowell was a member of Reno Hoo-Hoo club No. 129, which served Reno and the surrounding area. McDowell moved to Nevada in 1950, first living in Reno and then, in 1954, moving to Las Vegas. In 1955, the Hoo Hoo's chief officer, the Snark of the Universe, appointed McDowell to the position of Deputy Snark (i.e. chief representative) of Nevada. McDowell was involved in the lumber industry. A 1952 Reno city directory lists him as being manager of the Home Lumber Company in that city. The 1954 Las Vegas city directory shows that McDowell was manager of M & T Builder's Supply.

You can take a closer look at McDowell's Deputy Snark certificate at the Van Gorden-Williams Library & Archives Digital Collections website.