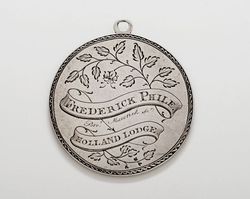 Here at the Scottish Rite Masonic Museum and Library, we are big fans of the personal medals and badges some Masons had made for themselves in the late 1700s and early 1800s. You may have read posts about the mark medal that belonged to Ezekiel Bascom and an associated mark book or saw the post discussing a gold Masonic medal owned in Connecticut. Although the museum counts many personal Masonic medals in its collection, we are always on the lookout for new objects to help us tell the story of American Freemasonry. A few months ago we were thrilled to add a mark medal made for Frederick Phile of Holland Mark Lodge and engraved by "Bror. Maverick" to the collection.

Frederick Phile (ca. 1740-1793) of Philadelphia likely commissioned the medal when he received the Mark Master degree at Holland Mark Lodge in New York City, sometime between 1788, when members of Holland Lodge No. 8 established Holland Mark Lodge and 1793, when Phile died. Records detailing Phile’s Masonic activity are sketchy, but he seems to have taken the Entered Apprentice degree at Lodge No. 2 (Moderns), in Philadelphia in 1760. He worked as a physician until around 1770, when he took on the duties of naval officer for the Port of Philadelphia; a position Phile held, in different capacities, on and off, until his death. During the Revolutionary War, Phile, a German-born naturalized citizen of Great Britain, served as a surgeon for a Pennsylvania battalion. Although Holland Mark Lodge drew most of its membership from Holland Lodge, occasionally out-of-town Masons, like Phile, who had not taken the Mark Master degree elsewhere would pay the fee (24 shillings in 1791) and receive the degree at Holland Mark Lodge. In 1791, for example, the lodge granted the mark degree to Masonic travelers from France and Rhode Island.

As part of the ritual for the Mark Master degree, the initiate chose a distinct mark or emblem. The lodge secretary noted this unique mark in his records. For his emblem Phile selected a heart over three crossed arrows. This symbol doubtless held meaning for Phile, but we have not been able to identify what this symbol might have represented. Holland Mark Lodge required that, "Every member shall furnish himself with a Mark which shall be of Silver, with the Name of the Lodge engraved thereon." As described in a research note published in the Transactions of the American Lodge of Research, from 1788 to about 1800, Holland Mark Lodge members recorded their marks with both a written description and an impression of their engraved mark in the lodge’s minute book.

Of the over thirty mark medals in the museum’s collection, only Phile’s is signed by an engraver. The "Bror Maverick" who incised his name under Phile’s on this silver disk is thought to be Peter Rushton Maverick (1755-1811), a member of both Holland Lodge and Holland Mark Lodge. Phile’s medal is one of six known that were crafted for members of Holland Mark Lodge. One, also signed by Maverick, is at the Smithsonian Institution; the museum at the Grand Lodge of England holds another and two form part of a private collection. The library of the Grand Lodge of Iowa counts Peter Rushton Maverick’s own 1789 mark medal as part of its collection. A history of Holland Lodge relates that Peter Rushton Maverick, who joined the lodge in 1789, cut a seal for Holland Lodge the year before. He also engraved maps, bookplates and Masonic certificates, among other things. The museum holds a certificate, estimated to date from around 1790, for Alexandria-Washington Lodge No. 22 and attributed to Peter Rushton Maverick, in its archives. We are now glad to be able to include another example of Maverick’s work in our collection.