Hindoo Theology for the Use of Missionaries

Hindoo Theology for the Use of Missionaries (A Masonic Cipher) 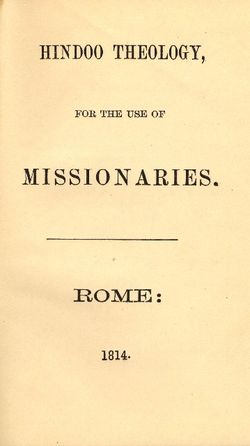 When I first came across a small 74-page book in our collection called Hindoo Theology for the Use of Missionaries, I knew that I couldn't take the title page at face value.

First of all, the publication information on the title page indicated that it was printed in Rome in 1814. As a librarian who has seen a lot of books printed in the early 19th century, I was sure that this book was not printed that early - and pretty sure it probably wasn't printed in Rome, either. It looked to me like it was more likely to have been printed in the late 19th or early 20th century. Secondly, the book was quite clearly some kind of fraternal ritual cipher book. We have many cipher books in our collection and a few of them - like Magicians' Magic Movements and Ceremonies - have deliberately misleading titles. I suspected that Hindoo Theology was another case of Masons having some fun at disguising ritual books.

It was while I was in touch with Arturo de Hoyos, Grand Archivist of the Scottish Rite's Southern Jurisdiction about another book when he mentioned Hindoo Theology for the Use of Missionaries in passing. He stated that it was a cipher for the rituals of the Royal Arch Chapter for the State of New Jersey. And yet I wanted to know more about this book - and about its odd title.

After sleuthing around a bit more I was able to find a definitive printed source that talked about this little book. In the 1950 Proceedings of the Grand Royal Arch Chapter of the State of New Jersey, there's a report of the Grand Historian, Harold V.B. Voorhis, entitled "The 'Manual' and The 'Hindoo.'" Voorhis was a top-notch Masonic scholar, so I knew that I had found a good resource. Voorhis writes:

Let us now look into the advent and adventure of that Masonic oddity known as the "Hindoo." We have no authentic data concerning the author or authors of the "Hindoo" or when it first saw the light of day. However, it is substantially certain that it appeared shortly after the 1864 Gould "Guide to the Chapter" and was published by [James L.] Gould in Connecticut. Consequently, it is not without normal surmise that Gould was responsible for its production. It is doubtful if the name has any significance - "Hindoo Theology for the Use of Missionaries -- Rome -- 1814." It must have been that he compiled it at the instigation of Companion John Sheville, with whom he collaborated in producing the Manual, because, so far as is known, the "Hindoo" was only used in New Jersey, where Companion Sheville had been Grand High Priest.

As to why "Hindoo" theology, I'm still not sure. It's possible that this is simply a case of the West exoticizing an unfamiliar Eastern religion - the same kind of Orientalism that gave rise to the Shriners and other Masonic and fraternal groups and degrees that present Eastern cultures and religions through the prism of 19th-century Western viewpoints. If any of our readers have thoughts on other cultural references that may have made "Hindoo Theology" an unsurprising choice of title, we'd love to hear your thoughts.

Posted at 09:00 AM in Ciphers, Freemasonry, Hindoo Theology for the Use of Missionaries, Posts by Jeff Croteau, Printing History, Rare books, Rituals, Royal Arch | Permalink | Comments (0)