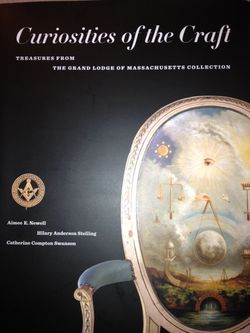 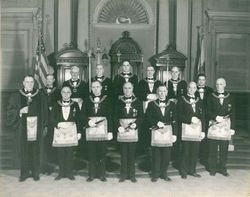 Happy Anniversary to the Grand Lodge of Massachusetts! 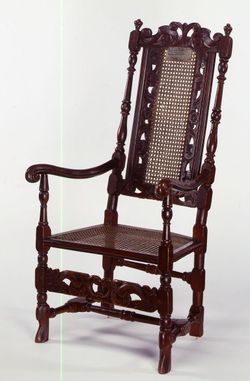 July 30 marks the 276th anniversary of the formation of the Grand Lodge of Masons in Massachusetts.  On that day in 1733, Henry Price (1697-1780) officially brought Freemasonry to America by constituting the Grand Lodge in Boston.  As Provincial Grand Master of North America, Price was charged with ensuring that the Grand Lodge followed the printed Constitutions, or rules, of the fraternity; kept the annual December feast day of St. John the Evangelist, one of Freemasonry’s patron saints; and established a “General Charity” for the “Relief of Poor Brethren.”  Two hundred seventy-six years later, the same kinds of activities continue to define the Grand Lodge, which is the third oldest in the world.

Originally owned by Henry Price, the chair seen here is now part of the collection of the Grand Lodge of Massachusetts, which is housed at the National Heritage Museum.  Currently, it is on view in the Museum’s exhibition, “The Grand Lodge of Masons in Massachusetts: Celebrating 275 Years of Brotherhood.”  The exhibition will close on October 25, 2009, so do plan a visit soon.  (If you can't make it to the Museum by October 25, or want to relive your visit, take a look at our virtual version of the exhibition.)

London-born Henry Price apprenticed as a tailor.  He arrived in Boston in 1723 to pursue this trade and soon met with success, opening multiple shops.  He had become a Freemason in England prior to 1723.  In 1733, while in England on business, he approached the Grand Lodge of England with a petition signed by 18 Boston men seeking to form a Masonic lodge.  This petition was granted.  Price returned home to Massachusetts, where he constituted both the Grand Lodge and St. John’s Lodge, the oldest local lodge in the state.

In the early 1760s, Henry Price retired to Townsend, Massachusetts, where he served as representative to the Provincial Legislature in 1764 and 1765.  His several-hundred-acre estate, which included farms, mills and mechanical shops, reflected his prosperity.  On May 14, 1780, while splitting rails on his estate, Price’s axe slipped, wounding him in the abdomen.  He died six days later, at the age of 83.

This armchair shows a common style from the 1720s that was imported from England by the thousands.  Updated with painted graining at some point in its life, this example was cherished as a relic for almost two centuries.  Passed down in the Price family, the chair was donated to Henry Price Lodge in Belmont, Massachusetts in 1898, and then to the Grand Lodge Museum in 1930.