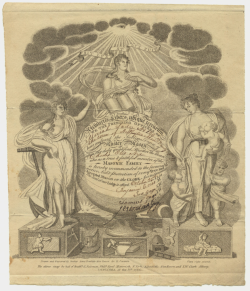 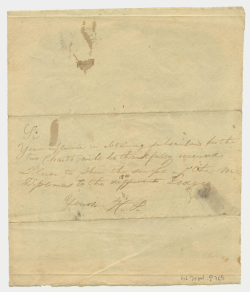 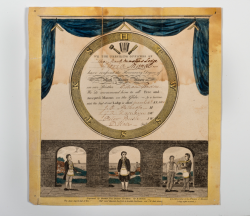 On March 4, 1820, the officers of a mark master lodge, possibly Mark Master’s Lodge Gloria Mundi, signed and issued a certificate to William Gordon.  This document attested that Gordon had received the Mark Master Mason degree and that the lodge officers recommended him “to all Free and Accepted Masons on the Globe.”

This colorful certificate with its charming portrayals of a lodge master at the bottom of the page is an intriguing one.  In the early 1800s many grand lodges, such as the Grand Lodge of Massachusetts, began issuing certificates for all newly made Master Masons.  Many were issued and saved.  Today they are fairly common. However, certificates for the Mark Master Mason degree in any American state in the early 1800s are rare.  This one, preserved in the collection of the Grand Lodge of Massachusetts, appear to be the only example in that collection and there aren't any in the Scottish Rite Masonic Museum & Library's collection.

Adding to this document’s interesting features, the information printed on the bottom edge of this certificate, which says, Engraved by Brother Amos Doolittle New Haven: for H. Parmele Diaploma of the 4th Degree. The above may be had of Br’s [scratched out] Phild. Saml Maverick New York, A. Doolittle New Haven, and I. W. Clark Albany…, suggests that production and sale of the certificate was conceived of as a coordinated effort by several entrepreneurs.

Amos Doolittle (1754-1832), a New Haven artisan, engraved the certificate. He did so for Henry Parmele (d. 1821), an author and publisher who also sold engraved Masonic aprons. From the brief information noted on the certificate, Parmele seems to have arranged that colleagues in different parts of the country offer the certificate, or diploma, to customers.  Doolittle made the certificates available in New Haven. Samuel Maverick (1789-1845), an engraver and printer, sold them in New York City.  Israel W. Clark (ca. 1789-1828), a printer, publisher and editor in Albany, had them for sale in that city.  Parmele, according to census records, lived in Philadelphia by at least 1820, sold copies there. The scratched out name likely read “Wm McCorkle,” possibly William McCorkle (ca. 1776-1826) a Philadelphia editor and publisher.

Given that we have found only one record of another copy of this certificate, it seems that few copies were sold--it is hard to imagine that this multi-state business venture met with success.  Adding to the mystery, research in proceedings of the Grand Chapters in the New England states, Pennsylvania and New York, has not turned up a mark lodge with the words “Gloria Mundi” in its name.  It is possible that the phrase near the top of the certificate, rather than the name of a mark lodge, is an abbreviated version of the motto “Sic transit gloria mundi” (Thus passed the glory of the world), often used in Freemasonry.  Compounding the mystery, to date we have not been able to identify the recipient of the certificate—William Gordon—or any of the lodge officers who signed this certificate.

If you have seen other early 1800s mark degree certificates or have ideas about this one, we’d love to hear from you—leave us a comment below.

New to the Collection: A Royal Arch Apron 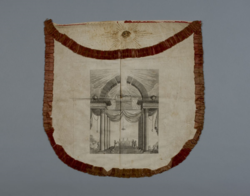 With over 400 Masonic and fraternal aprons in the Scottish Rite Masonic Museum & Library collection, we can be choosy when we add to our holdings.  But we are always intrigued when an apron with a different style or decoration shows up.  This was the case with this one, which we purchased at auction last fall.  The engraved design was new to us and we were very excited to add it to the collection.  The central archway with the ark of the covenant, columns, drapes and the figures in the center and to the sides all relate to the ritual for the Royal Arch degree.  The (originally) red trim also helps identify this apron as one that would have been worn to Royal Arch chapter meetings.  Unfortunately, the history of this apron has been lost and we do not know who originally owned it.  It also does not have any markings identifying the engraver or the printer.

Many engraved designs used on aprons were also used on certificates.  As far as we know, we do not have a copy of this certificate – yet.  But, our friends at the Henry Wilson Coil Library and Museum of Freemasonry in San Francisco do have a copy of a certificate decorated with this engraving.  That certificate does have some information about the publisher and sellers.  Printed along the bottom of the certificate is “Pub[lishe]d by H. Parmele.  To be had of [Comp[anion]s?] S. Maverick N. York A. Doolittle New Haven and J.W. Clark Albany.”  Presumably the apron was printed from the same plate, or at least a plate engraved by the same person who cut the plate for the certificate.

Printer and publisher Henry Parmele (ca. 1781-1821) was active in Connecticut.  He reportedly came up with the idea of an illustrative Masonic chart of symbols before Jeremy L. Cross’s (1783-1860) The True Masonic Chart, or Hieroglyphic Monitor (1819), but Cross beat Parmele to the press and his book, with its groundbreaking illustrations, was available first.  Cross’s book became a best-seller and Parmele’s chart languished.

The other men named on the certificate were all active engravers in their respective locations.  Doolittle worked with Cross on the illustrations for his The True Masonic Chart.  Maverick (b. 1789), Doolittle (1754-1832) and Clark (dates unknown) inevitably both engraved and sold Masonic certificates, along with many other types of documents.

To learn more about our apron collection, see our new book, The Badge of a Freemason: Masonic Aprons from the Scottish Rite Masonic Museum & Library, available June 2015 at www.scottishritenmj.org/shop.  Members of the Museum & Library or of the Northern Masonic Jurisdiction can pre-order the book now (April 2015) through May 31 at a discounted price, by mailing this form with a check.