Henry Gassett's Catalogue of Books on the Masonic Institution 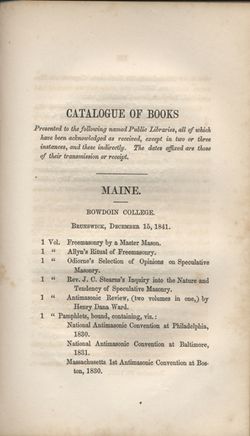 In the fall of 1831, around the time that former U.S. Attorney General William Wirt was nominated as the Anti-Masonic political party's presidential candidate for the 1832 election, a prominent Boston businessman named Henry Gassett presented a number of anti-Masonic publications to the libraries of Harvard College, Amherst College, and Andover Theological Seminary.  Gassett would continue this practice of giving gifts of anti-Masonic literature to public and academic libraries for the next twenty years. Although his first gifts were given to libraries in his home state of Massachusetts, Gassett later sent anti-Masonic books and pamphlets to libraries as far west as Utah, as well as to numerous libraries outside the U.S., mostly in Great Britain.

In 1852, Gassett published his Catalogue of Books on the Masonic Institution, In Public Libraries of Twenty-Eight States of the Union, Anti-Masonic in Arguments and Conclusions, a book that lists the name of each institution, date of gift, and list of anti-Masonic titles that he donated (see image).

Henry Gassett (1774-1855) was a dry-goods importer described by one biographer as "an intimate personal friend of John Quincy Adams." Adams, of course, was perhaps the most prominent politician who supported anti-Masonry during the late 1820s and 1830s, and published his own anti-Masonic book in 1847. Gassett lacked neither political influence nor finances in getting anti-Masonic publications into libraries. He is listed in an 1846 publication entitled "Our First Men:" A Calendar of Wealth, Fashion, and Gentility; Containing a List of Those Persons Taxed in the City of Boston, Credibly Reported to Be Worth One Hundred Thousand Dollars, With Biographical Notices of the Principal Persons. Gassett was heavily involved in the Anti-Masonic political party; in 1831, he served as one of the delegates from Massachusetts' Suffolk County at the Anti-Masonic political party's national convention in Baltimore, Maryland in September 1831 at which Wirt was nominated.

Gassett clearly perceived that if he gave books freely to libraries, they were likely to accept his gift and add the books to their collections. And he was, on the whole, correct. In part, Gassett was successful because he was doing this at such an early time in the history of American libraries, a time before the professional field of librarianship had developed and when selection of materials for libraries was decidedly more haphazard. Charles Ammi Cutter (1837-1903), colleague of Melvil Dewey (1851-1931), and an important early leader in the new field of library science, wrote the following in 1891 about Gassett's attempt to use public libraries "for the purposes of propagandism":

"Some 40 years ago Henry Gassett, during the Anti-Masonry trouble, presented to over 100 libraries a series of books opposed to the society. These, so far as we are aware, are the only distinct attempts that have been made as yet to disseminate a doctrine or opinion through the library, and were not only of trifling extent, but were made at a period when libraries were both inadequate and little used. Now we have organized societies for spreading particular theories and arguments, yet it is to be questioned if they take advantage of this extremely cheap and advantageous way."

Today, scholars interested in the history of printing and anti-Masonry may be strangely grateful to Gassett for his 1852 book. As William L. Cummings wrote in his 1963 book A Bibliography of Anti-Masonry, "[Gassett's Catalogue of Books on the Masonic Institution] has proved very helpful in locating collections in which some of the more rare Anti-Masonic items could be found." More recent scholarly bibliographies, such as Kent Walgren's 2-volume 2003 publication Freemasonry, Anti-Masonry and Illuminism in the United States, 1734-1850: A Bibliography, also owe an odd debt to Gassett's fervent, twenty-year campaign to insure that libraries throughout the United States (and a handful beyond) contained works of anti-Masonry on their shelves.

Gassett, Henry. Catalogue of Books on the Masonic Institution, In Public Libraries of Twenty-Eight States of the Union, Anti-Masonic in Arguments and Conclusions, By Distinguished Literary Gentlemen, Citizens of the United States: With Introductory Remarks, and a Compilation of Records and Remarks. Boston: Printed by Damrell & Moore, 1852.
Call number: RARE 19.G252 1852

Posted at 09:00 AM in Anti-Masonry, Catalogue of Books on the Masonic Institution, Freemasonry, Henry Gassett, Library history, Posts by Jeff Croteau | Permalink | Comments (0)