In 1924 artist Gamaliel Beaman (1852-1937) gave this transfer-print decorated pitcher to his friend Amos Clayton Parker (b. 1885).  Parker, an interior decorator and member of Norumbega Lodge in Newtonville, Massachusetts, gave or sold it to the Grand Lodge of Massachusetts. It is now part of the Grand Lodge's collection on loan to the Scottish Rite Masonic Museum & Library. 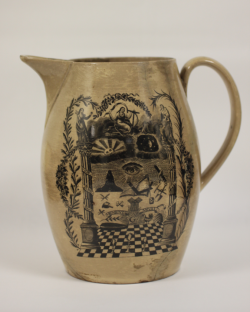 In addition to painting, Beaman also sold antiques in Princeton, Massachusetts.  He bought the pitcher some 40 years before he presented it to his friend Parker.  Beaman noted in a statement that accompanied the pitcher when it entered the Grand Lodge’s collection that he had purchased the vessel in nearby Templeton, Massachusetts, “in 1884, of Mrs. Works her Husband was the Tyler + took the Pitcher Home she said as the Lodge Closed for the last time.”  He further recorded that the pitcher was a relic from a lodge that had long since ceased operation and whose charter had been lost.  Beaman believed the pitcher was something out-of-the-ordinary stating that because of its history, “this Old Pitcher has added interest.”

Though efforts to identify a Mrs. Works who lived in Templeton in the 1880s have fallen short so far, it is possible that this pitcher may have once been used at Harris Lodge.  This group met in Athol, Massachusetts, starting in 1802.  From 1813 to 1834, the lodge met in Templeton. This lodge operated during the time when imported English transfer-print decorated earthenware, like this pitcher, enjoyed its greatest popularity. 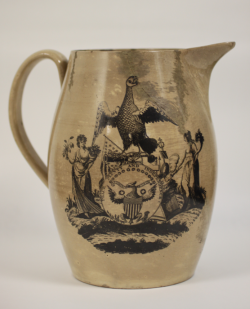 Two transfer prints grace this pitcher.  One, pictured to the right, shows a common design that displays a raft of Masonic symbols between two columns surrounded by swags of flowers.  The other print, pictured to the left, depicts a patriotically themed design that English pottery makers developed to appeal particularly to American consumers.  This image shows a winged bird, meant to be an eagle, atop a representation of the Great Seal of the United States ornamented with the motto “Peace, Plenty and Independence.”  This motto was a much-proclaimed toast in the late 1700s and early 1800s. The American flag is in the background and allegorical figures bookend the design.  In embellishing this pitcher with these two images, the pottery decorator hoped to attract the business of a purchaser proud to be both an American and a Mason.

William G. Lord, “History of Star Lodge,” Proceedings of the Most Worshipful Grand Lodge of Ancient Free and Accepted Masons of the Commonwealth of Massachusetts for the Year 1939 (Cambridge, Massachusetts: The Cosmos Press, Inc., 1940) 348-351.