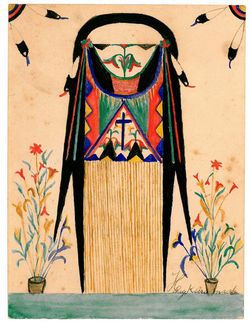 I have long been intrigued by this little painting (only 8 inches by 6 inches) of a Plains Indian artifact.   We know the name of the artist, Henry Karunach (d. 1888), because he signed his work.  He would be a mystery to us if we did not have two accompanyng photographs.  They both tell us more about Karunach and provide context about his life.  This painting is one of the staff picks featured in "Curators' Choice:  Favorites from the Collection."

Karunach, a member of the Arickara tribe from Fort Berthold, North Dakota, was among the first Native American students who studied at the Hampton Institute (now Hampton University), in Virginia.  Founders established the school in 1868 with the goal of educating recently freed African Americans.  A decade later, the school began teaching young Native American men and women  in trades, English language and other subjects with the now-dubiously regarded goal of “civilizing” them. From 1878 to 1923, over 1,300 Native American students attended the Hampton Institute. 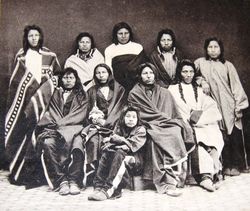 Hampton Institute administrators commissioned portraits of students when they arrived at the school and again several months later.  The school used these images to illustrate how students’ studies and experiences at the school changed them.  Administrators employed the photographs in seeking political support and funding for their work.  In the first photo shown here, taken in 1878, Karunach, wearing a long shirt (far right), stands in the back row of a group of ten students.  Fifteen months later, the photographer captured him and seven other students with whom Karunach had entered school.  In this image, they are wearing suits, ties and short haircuts.

At the Institute, Karunach, whose name meant “Sioux Boy,” honed his English skills and learned how to make shoes.  He also created this colorful painting of an object, perhaps a garment, decorated with feathers, fringe and bright colors.  On the back of it, someone noted, “The work of an Indian at 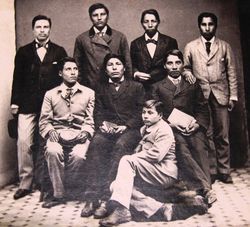 Hampton School.”  The caption on the later of the two photos says Karunach was “doing well” working as a shoemaker at Fort Berthold in North Dakota.  I hope that description matched Karunach’s own assessment of his work and life after school.  He died in 1888, ten years after he started school at the Hampton Institute.